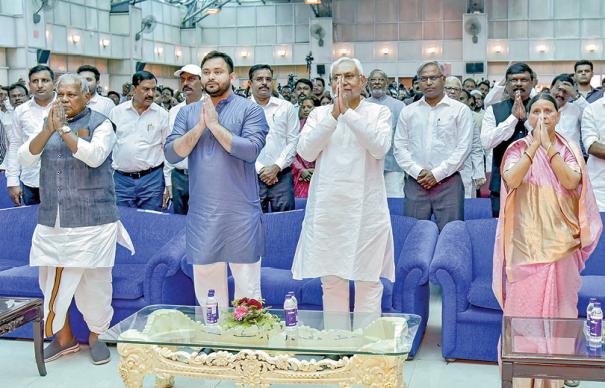 Patna: In Bihar, 31 people, including 16 from the Rashtriya Janata Dal, took office as ministers yesterday.

In this case, the Bihar cabinet was expanded yesterday. In this, 16 people from RJD and 11 people from Nitish Kumar’s United Janata Dal took office as ministers.

Most of the ministers from the United Janata Dal, who were ministers when the BJP was in the coalition, have returned.

Afaq Alam and Murari Lal Gautam from the Congress party have also been included in the cabinet. Santosh Suman from Jitan Ram Manji’s Hindustan Awam Morcha party also took over as minister. Sumit Kumar Singh, the only independent MLA in this alliance, also took charge as a minister.

The strength of Bihar’s mega coalition is currently 164. The new government is expected to prove its strength in the Legislative Assembly on the 24th.