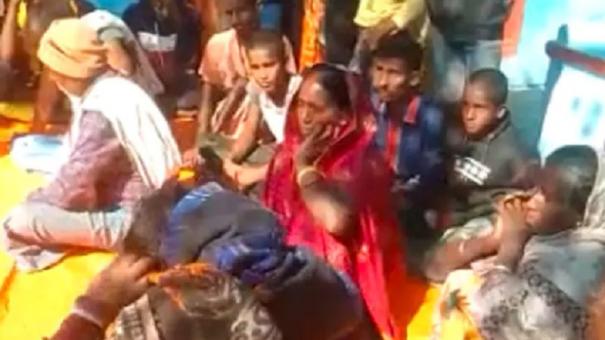 Patna: In Bihar, a village panchayat has awarded just 5 ukis to the person concerned for raping a 5-year-old girl. The public has registered their objections to the video of the punishment going viral on the internet. Also, they have demanded that the Bihar government should take appropriate action in this incident.

The incident took place in Bihar’s Nawada district. In this incident, the accused took him to his chicken farm on the pretext of buying candy. It seems that the girl was sexually assaulted there. He was presented in the panchayat under the leadership of the so-called elders of the village. It is unlikely that the person sexually assaulted the girl in that panchayat. We are punishing Achirumi only for the crime of taking her to the hideout. They say that he should put five ukis before the village panchayat. The person also hastily puts 5 ukis and sits down. A video containing these scenes has been released.

Some netizens who shared the video tagged Chief Minister Tejashwi Yadav and questioned whether appropriate action would be taken for the plight of the girl.

Regarding this, Superintendent of Police Gaurav Mangala said, “A first information report has been registered in connection with this incident. The police is investigating. The culprits will definitely be punished.”