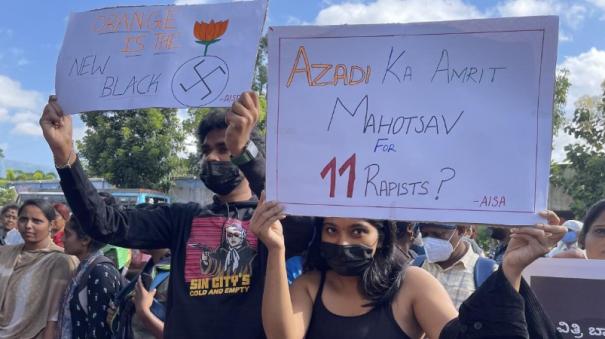 New Delhi: The Supreme Court has issued a notice to the central government and the state government of Gujarat regarding the release of 11 people in the Bilgis Banu case.

During the 2002 riots that followed the Godhra train burning incident in Gujarat, a pregnant woman named Bilgis Banu was gang-raped by a gang. 7 members of his family including his child were murdered by the mob. This incident shocked the country. In this long-running case, 11 accused were sentenced to life imprisonment in 2008. Under the 1992 commutation policy, the Gujarat government granted commutation of sentence to those who had been in jail for more than 14 years. Subsequently, all 11 people were released on the 15th.

Meanwhile, three people, including Marxist leader Subashini Ali, filed a case in the Supreme Court against the Gujarat government’s commutation of sentences to the 11. Senior Advocate Kapil Sibal and Advocate Aparna Bhat appeared for the petitioners. The case came up for hearing before a bench comprising Chief Justice NV Ramana, Justices Ajay Rastogi and Vikram Nath.

At that time, Justice NV Ramana said, “The Supreme Court did not order the release of all 11 people in the Bilgis Banu case. One of the convicts in the Bilgis Banu case had filed a case in the Supreme Court seeking commutation of sentence. It had directed the Gujarat government to consider his plea under the 1992 commutation policy, which was in force when he was convicted. In this case, we order to send a notice to the central government and the Gujarat government to respond accordingly,” he said.

The hearing has been adjourned for 2 weeks. More than 6000 people have sent letters to the Supreme Court against the release of Bilgis Banu case convicts. Former Supreme Court judge Umesh Selvi, who participated in a recent program, asked whether the reduction of sentence in the Bilgis Banu case was legal, but was it fair? It is significant that the question was raised.