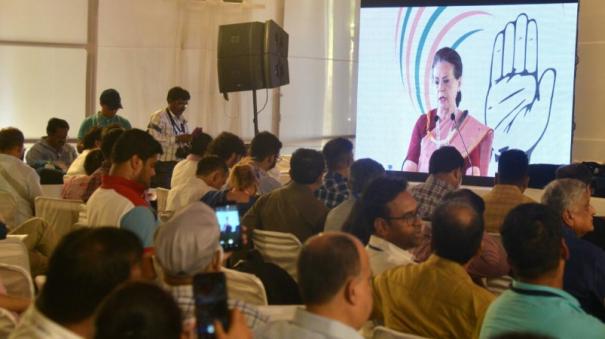 Udaipur: ” Congress leader Sonia Gandhi has said that the BJP and the RSS are disturbing the peace in the country.

The 3 day ‘Thought Meeting’ of the Congress started yesterday in Udaipur, Rajasthan. About 400 senior leaders, including party leaders Sonia Gandhi, Rahul and Priyanka Gandhi, were present.

Speaking at the opening ceremony of the conference, Congress President Sonia Gandhi said:

We have benefited from the Congress party. We are all indebted to the party in that respect. Now is the time to repay the loan. The senior leaders of the party should set aside their will and give priority to the development of the party.

The party needs immediate changes over time. In the infrastructure of the party, changes in the day-to-day functioning must be implemented. We must forget our differences and act in unity. Only then can the party be strengthened.

Tensions and fears are mounting in the BJP regime. It divides people in the name of religion. The country’s high culture of unity in diversity is being destroyed. Minorities, a part of the country, are being targeted.

Inflation is rising and the prices of essential commodities are rising. Unemployment is on the rise. Without worrying about this, the BJP and the RSS are disturbing the peace in the country. Prime Minister Narendra Modi maintains a deep silence.

Opposition parties are being politically retaliated against. Central intelligence agencies are being targeted by opposition leaders. The BJP praises those who assassinated the Father of the Nation, Mahatma Gandhi. We must preserve the unity of the country at this critical time. All Congress leaders must work together for this. Thus spoke Sonia.

Rahul on the train

Former Congress president Rahul Gandhi and senior leaders left Delhi for Udaipur by train for the meeting. They traveled in a private box booked by Congress on the Chattok Express.

Congress volunteers from Haryana and Rajasthan gathered at every railway station to greet Rahul Gandhi. It was also a testament to the strength of the various leaders and factions. They do not understand the fact that at some train stations the train only stops for a few minutes. Rahul received garlands and roses from as many volunteers as possible.

Rahul Gandhi had tea at Chittorgarh railway station at 5 am yesterday. There he met the public, mostly young people. Rahul also spoke to the loaders at the railway station.

In a video released by the Congress leaders, it can be seen that Rahul got off the train and was greeted by the volunteers. Rahul’s recent participation in a party at a nightclub in Nepal has caused controversy. The train journey is thus seen as an attempt to repair the damage done to his reputation.

As the BJP has been highlighting Rahul’s video, his advisers are said to have told him that internet train travel with people would help again.