BJP is trying to crush us due to fear of defeat: Kejriwal 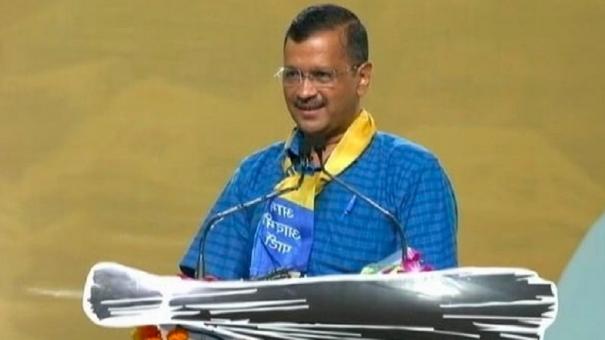 New Delhi: Delhi Chief Minister and Aam Aadmi Party Coordinator Arvind Kejriwal has said that the BJP is trying to crush the Aam Aadmi Party due to the fear of losing the Gujarat assembly elections.

Also Gujarat media has been restricted not to broadcast anything like campaigns and meetings of Aam Aadmi Party in connection with Gujarat elections. Hiran Joshi, direct adviser to the Prime Minister, issues these orders. Media editors have been told about this. The media have also been warned that they will face severe consequences if they violate the AAP’s news. Hiran Joshi better stop such threats. Perhaps even if any of the media editors share Hiran Joshi’s tweets, he and the Prime Minister will not be able to face each other.

AAP will form the government in Gujarat. Prime Minister criticizes us for practicing free culture. He says that the country’s economy will deteriorate. Only unscrupulous, corrupt and traitors say that free people are not good for the nation. If any politician criticizes freebies like that, you understand that his intention is wrong,” he said.

Aam Aadmi Account: BJP has been in power in Gujarat for the past 24 years. After winning the Punjab elections, Kejriwal had said that their goal was to oust the BJP government there. In this case, in a recent interview, he had talked about the people’s opposition to the BJP. As the state of Gujarat is going to face assembly elections soon, the BJP is making serious efforts to maintain its rule and the Aam Aadmi Party to establish themselves there. Political observers say the Aam Aadmi Party is strengthening itself in Gujarat by going to the home of an auto driver for meals and shrugging off outrage at party workers being assaulted.