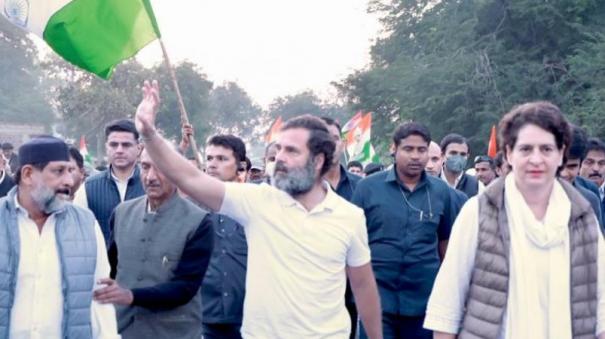 The BJP accused the Indian Unity Yatra of chanting ‘Long live Pakistan’. Congress General Secretary Venugopal has responded to this. “The problems raised by Rahul Gandhi during the Indian Unity Yatra like unemployment, poverty and hatred have been accepted by all sides. From day one, people have been realizing the extent of sacrifices made by Rahul Gandhi. For the past few years, the BJP has been engaged in tarnishing the reputation of Rahul Gandhi. But now people are seeing the true face of Rahul Gandhi. People have got the impression that he is educated and compassionate.

The BJP people who are thinking against this Yatra have been trying since the first day to find any fault. But people are not going to believe them. We are not going to value BJP’s criticism. The Indian Unity Yatra has been a huge success in many states including Kerala and Tamil Nadu.

The youth of the country are completely disillusioned. BJP government is not providing enough job opportunities. Instead, people lose their jobs. BJP is trying to divide the country on religious lines. They misuse religion to hide their failure. Those who try to tell the truth face difficulties with this government. Election Commission, CBI bodies are not able to function independently. Even those in the judiciary are under such pressure that they cannot function independently. People should decide who should lead the country. This yatra is not just to make Rahul Gandhi the Prime Minister..” said Venugopal.

Talking about the Indian Unity Yatra, Congress President Mallikarjuna Kharge said, “Bharat Jodo Yatra is not just about getting votes in elections; We also do this to connect people with an ideology. Yatra is about uniting people against divisive forces,” he said.