BJP MP cleaned the toilet with his bare hands. 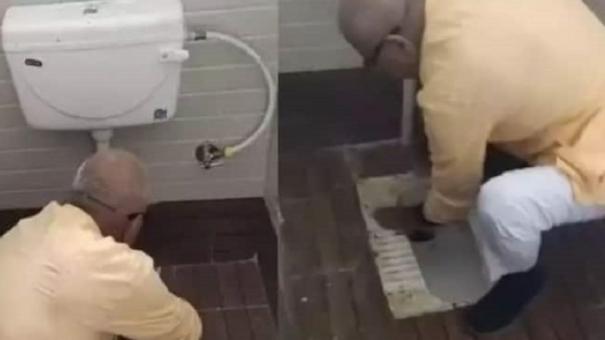 Reva: BJP MP in Madhya Pradesh A video of a man cleaning a toilet with his bare hands is going viral.

Madhya Pradesh State Rewa Constituency BJP MP Janardhan Mishra. He recently went to a tree planting ceremony in a government school. He also checked the toilets of that school, Gadkari Girls School. When he saw that the toilets were very dirty, he cleaned them with his bare hands.

The BJP Youth has conducted cleanliness drives across Madhya Pradesh starting from Prime Minister Narendra Modi’s birthday on September 17 and ending on Mahatma Gandhi’s birthday on October 2. Similarly, the tree also integrates mid-festivals. Accordingly, Janarthan Mishra MP. He visited this school.
Then he found the toilet dirty and cleaned it. Prime Minister Narendra Modi launched the Swachh Bharat scheme on October 2, 2014. It is noteworthy that under the scheme, 100 million toilets have been constructed in rural areas across the country so far.

Video of toilet cleaning by M.P. Janardhan Mishra shared on his Twitter page. It has received mixed reviews.