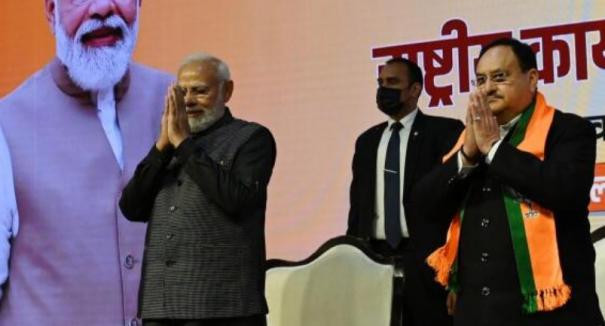 New Delhi: BJP National President J.P. Natta’s tenure has been extended till June next year. The resolution to this effect has been passed in the party’s national executive meeting.

The 2-day national executive meeting of the BJP held in New Delhi concluded today. Today’s meeting was attended by Prime Minister Narendra Modi, Union Ministers, State Chief Ministers, National leaders of the party and others. Various important resolutions were passed in this meeting.

Especially, JP who is the national leader of the party. Union Defense Minister Rajnath Singh moved the resolution to extend Natta’s tenure. This resolution was passed unanimously. Subsequently, JP Natta’s tenure has been extended till June next year. 2024 parliamentary election is going to be held, the election will be held by JP. The BJP has taken this decision to face Nadda’s leadership.

Talking about the election of JP Natta, Union Home Minister Amit Shah said, “JP is the national leader of the BJP. Natta is doing well. During the Corona Pandemic, he carried out various services on behalf of the BJP. Under his leadership, the party has won many states and formed governments. The party under the leadership of Prime Minister Narendra Modi and J.P. Nadda will have a bigger victory than the 2019 victory in the coming 2024 parliamentary elections. “Narendra Modi will be the Prime Minister of the country again,” he said.