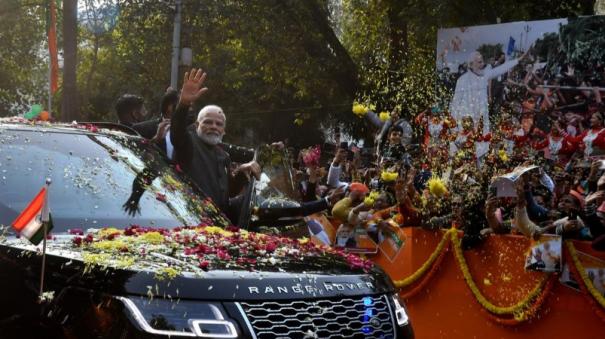 It has been announced that BJP’s national executive meeting will be held in Delhi on January 16 and 17. On this occasion, the national president of the party JP Natta held a consultation with party in-charges and co-in-charges across the country.

Before this meeting, around 1 km from Patel Chowk area to NTMC head office. Prime Minister Modi came in a procession.

BJP workers and supporters showered flowers on the Prime Minister and raised slogans to give him a rousing welcome. Huge cut-outs of the Prime Minister were also placed along the road. Posters related to various schemes of the government were also displayed. There was a performance by folk artistes from various states. Many sang patriotic songs.

After yesterday’s meeting, the party’s senior leader RS ​​Prasad said, “2023 is very important and we have to fight and win in 9 state elections this year and 2024 general elections. Natta said. Prime Minister Modi directed to identify weak booths and strengthen them. About 72,000 booths have been identified and we have reached 1.32 lakh booths,” he said.

According to party sources, various political and economic issues were also discussed in the meeting. BJP National President JP organized an exhibition on various themes at the NDMC Convention Center where the meeting was held. Natta started yesterday.

BJP National President JP Natta’s 3-year term ends this month. In this case, it seems that his tenure may be extended in this meeting so that he can lead the party during the 2024 Lok Sabha elections.