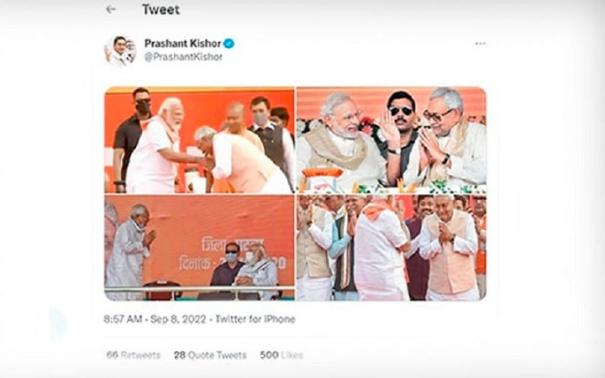 New Delhi: Prashant Kishore took to Twitter to respond to Bihar Chief Minister Nitish Kumar who criticized him for being an indirect supporter of BJP.

Earlier, Nitish Kumar said, “Prasanth Kishore is indirectly working for BJP. He wants to be with BJP. But PK doesn’t know what development work we have done in Bihar since 2005. All he knows is publicity, statements, campaign strategies. He is local only.” He is talking about politics. At one time, this same PK came with me as a supporter. I asked him to quit his job as an election strategist and join the United Janata Party as a full-time volunteer. He said he could not. Then he started working for various parties across the country. Politics is his career.

In response to this, Prashant Kishore shared some photos on Twitter this morning. In it, Nitish Kumar had posted a compilation of pictures of him bowing to the Prime Minister when he was in harmony with the BJP. Then he deleted it.

But along with those pictures, he said, “Nitish Kumar, who was earlier with the ruling party in Bihar, has joined hands with the opposition today. How reliable he is is yet to be predicted. But my prediction is that the new alliance now in Bihar will have no impact at the national level.”

There are talks that Nitish Kumar may be nominated as the prime ministerial candidate in the 2024 election by the mega alliance. But Nitish Kumar continues to deny it. It is in this context that Prashant Kishore has criticized Nitish Kumar.