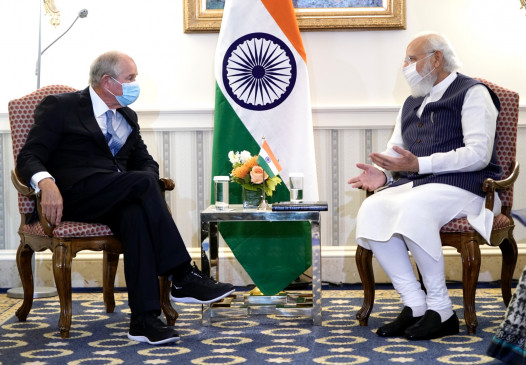 Digital Desk, Washington. Prime Minister Narendra Modi is on a 5-day US visit. In this episode, PM Modi talked to the CEOs of 5 big companies of America. These include the CEOs of Qualcomm, Blackstone Group, Adobe, First Solar, General Atomics. After meeting PM Modi, these companies have expressed their desire to work with India in many areas. At the same time, there is talk of investing billions of dollars.

American companies looking at India as a country of potential: Vivek Lal

General Atomics Chairman and CEO Vivek Lal said after the meeting with PM Modi that it was a great meeting. We discussed the immense potential in terms of technology, policy reforms in India and investment. According to the Ministry of External Affairs, Vivek Lal said that there is a lot of potential in the areas in which we are talking about working. I think American companies will be looking at India as a country of potential.

Drones is an upcoming sector in India and it is of particular interest to the youth. Interacted with Mr. Vivek Lal of @GeneralAtomics Global Corporation and spoke about how India is ushering a paradigm shift in drones policy, seen in our PLI scheme and reform measures. pic.twitter.com/8cEE2YcJ2s

Another $40 billion to be invested in India over the next 5 years – Stephen A. Schwarzman

Stephen A Schwarzman, Chairman, Blackstone, said that this (Modi government) is a very friendly government for foreign investors. For those who want to invest capital in India to generate employment, the Indian government should get a higher grade for their support. Schwarzman said in the meeting with the PM that India has been the best market in the world for his group. He said that India is the fastest growing country in the world, so he is very excited about the potential here for the group. It is a New York based American Alternative Investment Management Company. According to the Ministry of External Affairs, Schwarzman told the PM that Blackstone has already invested $ 60 billion in Indian assets. Schwarzman said his group plans to invest another $40 billion in India over the next five years.

It was a delight to meet Mr. Stephen Schwarzman, the CEO of @blackstone. His commercial success and intellectual prowess are admirable. We talked about India’s investment potential and why our country is one of the world’s most attractive destination for investment. pic.twitter.com/SwlY233stt

Adobe said that ‘we want more emphasis and interest in education’

PM Modi tweeted and wrote that Shantanu Narayan of Adobe is a very good friend of India. I sat down with him to discuss interesting ideas related to ed-tech, supporting Indian start-ups and fostering innovation. Shantanu expressed his desire to enjoy the videos and animations till every child in India. The Ministry of External Affairs said that Narayan said, Adobe said that ‘we want to put more emphasis on education and take interest in it. One of the issues we talked about was continuing to invest in innovation, he said. He believes that technology has the potential to pave the way for progress.

Mr. Shantanu Narayen of @adobe is a great friend of India’s. I sat down with him to discuss interesting ideas relating to ed-tech, supporting Indian start-ups and boosting innovation. Shantanu expressed keenness to take the joys of video and animation to every child in India. pic.twitter.com/MijntOHiRZ

One World, One Sun and One Grid Campaign

Mark Widmar, CEO of First Solar, pointed out that while PM Modi’s leadership has clearly worked to strike a strong balance between industrial policy as well as trade policy, this is a great opportunity for companies like First Solar to set up manufacturing in India. Ideal opportunity. According to the Ministry of External Affairs, Mark Widmer, CEO of First Solar, expressed happiness over the policies of the Government of India regarding environmental protection and related industries. The PM talked about the One World, One Sun and One Grid campaign and the possibilities associated with the ambitious target of 450 MW renewable energy.

The subject of solar energy is very close to my heart, because it concerns the future of our planet. Met the CEO of @FirstSolar, Mr. Mark Widmar and discussed why India is the right destination to invest in solar energy. Also talked about our green hydrogen mission. pic.twitter.com/5IWO9pA2pw

PM Modi tweeted that had a fruitful meeting with Cristiano, CEO of Qualcomm. We talked about leveraging technology for the greater public good and technological opportunities in India. He was interested in India’s progress in 5G and our efforts like PM-WANI to boost connectivity. According to the Ministry of External Affairs, the CEO of Qualcomm expressed a desire to work together in many areas, including 5G in India. The company’s chipsets are a popular choice of consumers in terms of mobile gaming and 5G technology.

Had a fruitful meeting with President and CEO of @Qualcomm, Mr. @cristianoamon. We talked about leveraging technology for greater public good and tech opportunities in India. He was interested in India’s strides in 5G and our efforts such as PM-WANI to boost connectivity. pic.twitter.com/Q3uJIK6xAM

PM Modi’s meeting with the Prime Minister of Japan

Japan is one of India’s most valued partners. I had an excellent meeting with PM @sugawitter on a variety of subjects that would further boost cooperation between our nations. A strong India-Japan friendship augurs well for the entire planet. pic.twitter.com/5N9ibqWDzy

In the bilateral meeting with Prime Minister Narendra Modi and Australian Prime Minister Scott Morrison, a range of topics were discussed to boost economic ties between India and Australia as well as improve personal ties. The Ministry of External Affairs said that this is another chapter in our comprehensive strategic partnership with Australia. The meeting discussed regional and global development as well as on-going bilateral cooperation in areas related to COVID-19, trade, defence, clean energy etc.

It is always wonderful to interact with my good friend, PM @ScottMorrisonMP. We had wide-ranging deliberations on strengthening cooperation in the fields of commerce, trade, energy and more. pic.twitter.com/rRkNxNc8Nr