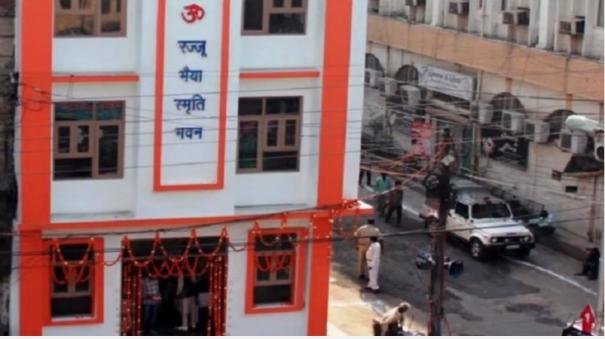 The Rashtriya Swayamsevak Sangh is located in the Alliganj area of ​​Lucknow, the capital of Uttar Pradesh. The BJP’s mother body, Dr. Neelkanth Mani Pujari. He works as an assistant professor at a college in nearby Sultanpur.

An information was shared by an previously unknown person on the WhatsApp of Neelkanth’s mobile phone yesterday. A threatening message was featured in three languages, Hindi, English and Kannada. Dr. Neerkant immediately lodged a complaint at the Mathieu police station in Lucknow

The police who registered the complaint launched an intensive investigation. In this, it was learned that the threatening information received on WhatsApp was sent by Raj Mohammad, a resident of Pudukottai in Tamil Nadu.

According to the WhatsApp, it was reported that the RSS offices in Lucknow, Unnao and Uttar Pradesh in Uttar Pradesh (5 locations in total) would be bombed.

Thus, the SIT of Uttar Pradesh confirmed the address by contacting the Tamil Nadu Police. Following this, the SIT, which was on a flight from Lucknow, arrested Raj Mohammad. He will be produced in the Pudukkottai court today and will be brought to Lucknow for trial.

In this case, it seems that the Karnataka police along with the Uttar Pradesh ADS force have registered a case and started an investigation.

Pilgrimage to Kanwar on July 14 after 2 years in Uttarakhand