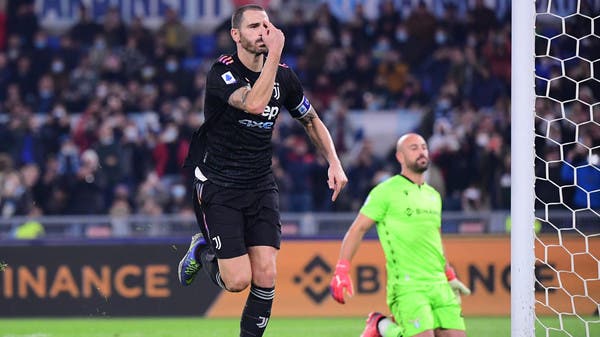 Central defender Leonardo Bonucci settled the strong confrontation between his team, Juventus and its host Lazio, by scoring two goals, winning 2-0 from two penalties, on Saturday in the thirteenth stage of the French League, which allowed Atalanta to consolidate its fourth position and move away from the capital club.

The confrontation between Juventus and Lazio had a special character, because the “old lady” team brought together its former coach, Maurizio Sarri, who took over the supervision of the capital’s team this season, succeeding Simone Inzaghi, who moved to Inter.

Massimiliano Allegri’s team deserved its first victory at the Lazio stadium since January 2019, as he knew how to manage the match and close the doors in front of his host, relying on counter-attacks that posed a threat to the Spanish goalkeeper Pepe Reina, despite his lack of the services of Argentine star Paulo Dybala.

The Turin giants ended the first half ahead with a penalty kick by Bonucci in the 23rd minute after a foul in the forbidden area against Spaniard Alvaro Morata by Danilo Cataldi, confirmed by the referee after resorting to “VAR”.

Lazio seemed unable to return to the meeting with its failure to threaten the Polish goalkeeper Wojciech Szczny, so that the result remained unchanged until the end of the first half, which witnessed Juventus losing the services of its Brazilian defender Danilo due to injury only a quarter of an hour after the start.

And the situation remained as it was in the second half, with a clear superiority and danger for Juventus versus a deficit for Lazio, until the last minutes when Federico Chiesa managed to snatch the ball and Reina skipped outside his line, who returned to remedy the situation but invaded the former Fiorentina player, so the referee awarded a second penalty kick to the guests. Bonucci also scored it successfully (83), to become, according to “Opta” statistics, the first defender to score two penalties in one league match since October 2007, when Maurizio Domitsi achieved that with Napoli.

And most importantly, certainly, Juventus, who had a very bad start to the season with his new-old coach Sarri, added three more points, raising his score to 21 points in sixth place and the same distance from fifth Lazio, who received his first defeat this season at home and fourth overall.

Atalanta was the biggest beneficiary of Lazio’s loss, as it moved away in fourth place after its landslide victory over injured guest Spezia and coach Thiago Motta 5-2.

Coach Gian Piero Gasperini’s team entered the meeting with the sixteenth-placed, and is ahead in fourth place, a point ahead of Lazio, and with his seventh victory of the season, he moved away from the capital club by 4 points.

After finding himself behind in the 11th minute with a goal scored by the French M’bala Nzolo for the Mota team, who faced his former coach Gasperini (he played under the latter’s leadership in Genoa in the 2008-2009 season), Atalanta responded harshly by scoring three goals in the first half through Croatian Mario Pasalic (18 and 41) and the Colombian Duvan Zapata (38 penalty kick).

The result remained the same until the last minutes of the match, when the hosts succeeded in adding two more goals through the other Colombian substitutes Luis Muriel (83) and Ukrainian Ruslan Malinovsky (89), before he managed to reduce the difference late with his second personal goal (1+90).

With this victory, Atalanta benefited his fans after he was unable to leave his stadium in the previous three matches, and prepared in the best way for his trip to Switzerland on Tuesday, where he will meet with Young Boys in the penultimate fifth round of the Champions League group stage.

Atalanta enters the meeting on Tuesday and is in third place, two points behind the leaders Manchester United and Villarreal, the second Spanish, who will be the last opponent of the Italian team on the eighth of December.

Later, Milan will also play the second with a difference of goals over Napoli, the leaders, in the hospitality of Fiorentina.