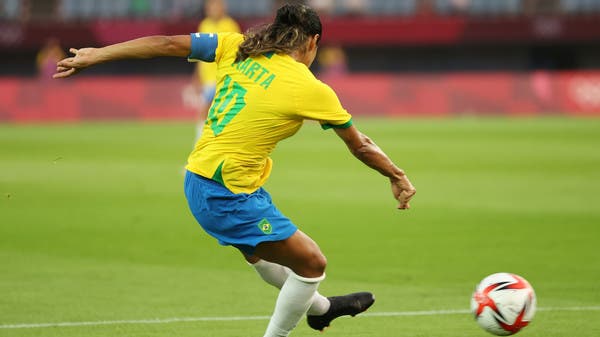 
Brazil’s Marta became the first female soccer player to score in five consecutive Olympics after scoring twice in a 5-0 thrashing of China at Miyagi Stadium in Rivo on Wednesday.

Marta, widely considered the best female footballer of all time with a record five-times FIFA Women’s Player of the Year, scored her first Olympic goal in Athens 2004 and after today’s double took her total to 12 goals in the Olympic Games.

The 35-year-old opened the scoring in the match, in Group F, in the ninth minute of a rebound and Debinia added the second goal in the 22nd minute.

Marta scored her second personal goal with a low shot from a narrow angle in the 74th minute, before Andressa converted a successful penalty kick in the 82nd minute, and Beatriz completed the five in the 89th minute. Their colleague Formiga, 43, also made history by becoming the first female footballer to participate in seven Copies of the Olympics. The Sao Paulo midfielder has participated in every edition of the Olympics since its inception at the 1996 Atlanta Games.

Formiga hopes to crown her career by winning a gold medal after taking silver in 2004 and 2008, while her participation in the Rio 2016 edition at home ended in tragedy after Brazil lost in the semi-finals and the bronze medal. The group also includes the Netherlands and Zambia.

Earlier in Group E, Britain beat Chile 2-0, and Manchester City’s Elaine White scored both goals, including the first goal at the Olympics.

Saudi Arabia: No travel for those who visited prohibited countries for 3 years

Jordan’s King: We were previously attacked by Iranian-made drones

After Biden’s decision – Russia to America: You will pay the price

Dani Alves feels "worried" ahead of the Tokyo Olympics