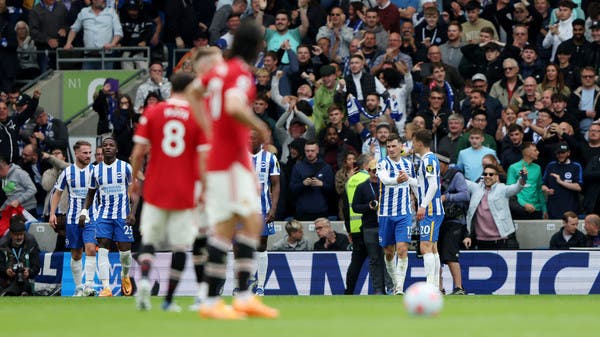 Brighton eliminated Manchester United’s hopes of securing a place in the Champions League next season, after they swept 4-0 on Saturday, in the 36th stage of the English Premier League.

Manchester United’s balance froze at 58 points in sixth place, five points behind fourth-placed Arsenal, knowing that United played 37 games and had one game left, while Arsenal had four games remaining.

On the other hand, Brighton raised its score to 47 points, in ninth place, five points behind West Ham, who is in seventh place (one of the qualifying positions for the European Championships) and three points behind Wolverhampton, who is in eighth place.

Brighton advanced in the 15th minute through Moises Caicedo, before Marc Cucurella added the second goal in the 49th minute.

In the 57th minute, Pascal Gross added the third goal for Brighton, while Leonard Trossard scored the fourth goal in the 60th minute.