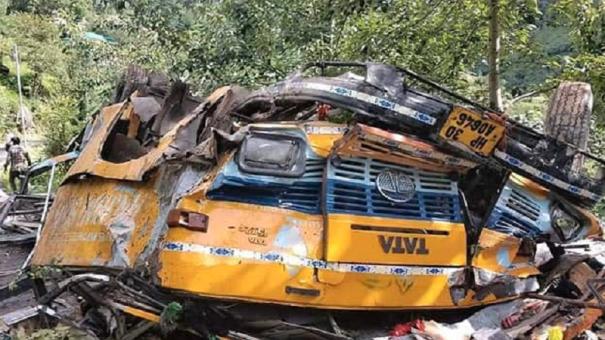 Gulu: 16 people, including school children, were killed in a bus accident in Himachal Pradesh.

Kullu Deputy Commissioner Ashutosh Garg said, “This morning, a private bus with school children and other passengers was going towards Sainj. When the bus reached the Kullu area, the vehicle suddenly lost control and fell into a ditch. In this, 16 people including the school children in the bus were killed. Many were seriously injured. Rescue operations are underway. They are coming. Eyewitnesses have said that the accident took place at exactly 8.30 am. Local people helped in the rescue work,” he said.

Apparently, there were 40 students in the bus that crashed.

Prime Minister Condolences: In this context, Prime Minister Narendra Modi has condoled the victims of the accident. In his obituary, he expressed his condolences to the bereaved families at this tragic time. He also said that he is praying for the speedy recovery of the injured.

It has also been announced that Rs 2 lakh will be given to the families of the deceased and Rs 50,000 to the injured from the Prime Minister’s Relief Fund.

The bus accident in Kullu, Himachal Pradesh is heart-rending. In this tragic hour my thoughts are with the bereaved families. I hope those injured recover at the earliest. The local administration is providing all possible assistance to those affected: PM @narendramodi