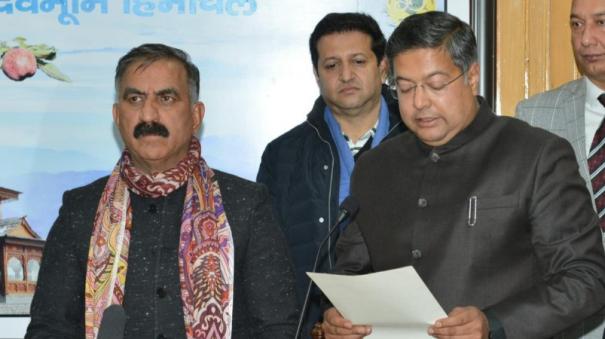 Shimla: Himachal Pradesh cabinet was expanded yesterday. 7 new ministers were sworn in at a ceremony held at the Governor’s House.

The Himachal Pradesh Legislative Assembly elections were held on November 12. The election results were announced on December 8. Out of the total 68 constituencies, the Congress won 40 seats and came to power. BJP got 25 seats.

In this context, the Himachal Pradesh cabinet was expanded yesterday. In a ceremony held at the Governor’s House in Shimla, 7 ministers were sworn in namely Thaniram, Chandrakumar, Harshvardhan Chauhan, Jagat Singh Negi, Rohit Thakur, Anirudh Singh and Vikramaditya Singh. Governor Rajendra Vishwanath Arlekar administered oath of office and secrecy to them.

Following this, Agni Hotri, a staunch supporter of Pratibha Singh, was given the post of Deputy Chief Minister. Now Pratibha Singh’s son Vikramaditya Singh has been appointed as the minister.