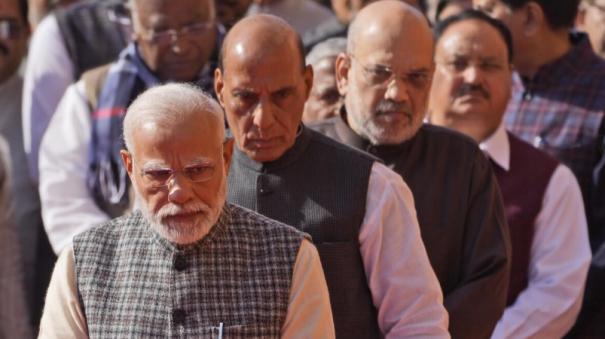 New Delhi: The 10 state assembly elections to be held this year are the semi-finals of the upcoming 2024 Lok Sabha elections. To win this election, the ruling BJP at the center wants to reshuffle the cabinet.

The cabinet is expected to be reshuffled before the central budget session this year. In this, there is an opportunity for the BJP in Gujarat state, where the BJP won the election again and formed the government.

Also, in the 10 states where elections are coming up this year, people who are influential in the BJP are also going to be included in the central cabinet. It seems that in the last cabinet reshuffle of the BJP’s 2nd term rule, chances will be given to deserving BJP leaders.

Regarding this, central cabinet sources told the ‘Hindu Tamil Vektik’ newspaper, ‘Prime Minister Modi has been removing non-performing ministers from the cabinet.

Senior Ministers: Therefore, this time also some senior ministers along with such people are going to be released from the post. All of them will contest in 10 state assembly and Lok Sabha elections. In this, Tamil Nadu also has a mandatory ministerial position.

Modi’s cabinet was last reshuffled on June 8 last year. Then 12 ministers were transferred. Similarly, this time also a large number of ministers are going to be changed. In this, it is said that opportunities will be given to Lok Sabha MPs, especially women MPs from separate constituencies. It is also said that Prime Minister Modi recently held a consultation with key executives and senior ministers of the party.

Change in party too: Keeping in mind the upcoming Lok Sabha elections next year, the BJP is also planning to make similar changes among the executives. In particular, the term of the party’s national president, J.Pinatta, is about to end this month. His tenure will be extended once more for a total of 3 years. This is due to Natta’s good understanding with BJP’s parent organization RSS, Prime Minister Modi and Union Home Minister Amit Shah.

Chance for Amit Shah too: Along with Chairman Natta, several other key executives are expected to be newly appointed at the national level. The final decision will be taken in the BJP National Executive Committee meeting to be held on January 16 and 17.