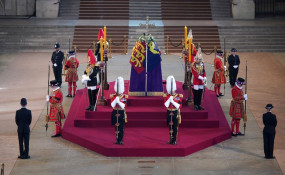 Digital Desk, London. A campaign has been launched to give the late British Queen the title Elizabeth the Faithful, as The Great is quite common and used by dictators and conquerors.

Senior UK politicians, including former Prime Minister Boris Johnson, have called Elizabeth II the Great, as she died last Thursday at the age of 96, reports the Daily Mail.

But Security Minister Tom Tugendhat referred to him as The Faithful last week, and today a former Conservative Party treasurer insisted it was the best moniker to use.

In a letter to the Daily Telegraph, Lord Farmer said it marked the fulfillment of a vow he had made at the height of his adulthood to serve us throughout his life.

She continued, in general she was indeed great, but more than 110 monarchs have been named—including Herod, Louis 14, who ordered the slaughter of the innocent (whose rule made the French Revolution inevitable) and Including Genghis Khan.

The only British monarch ever to be called The Great was Alfred, an Anglo-Saxon king of Wessex who fought the Danish invasion.

As the Daily Mail reports, his successors had recaptured the area and his grandson Athelstan is seen by historians as the first king of England.

Genghis Khan was a Mongol ruler who was known for establishing the largest empire in history. His empire extended from the Far East to Eastern Europe. His sons were very bloody.

Russia’s last and longest-serving Empress Catherine the Great came to power by ousting her husband Peter. He was born in an area of ​​modern Poland which was then in the Kingdom of Prussia. During his reign, Russia conquered part of Crimea, Poland and Alaska. According to the Daily Mail report, when she was 60 years old, her lovers used to be joined by men aged 40 years.