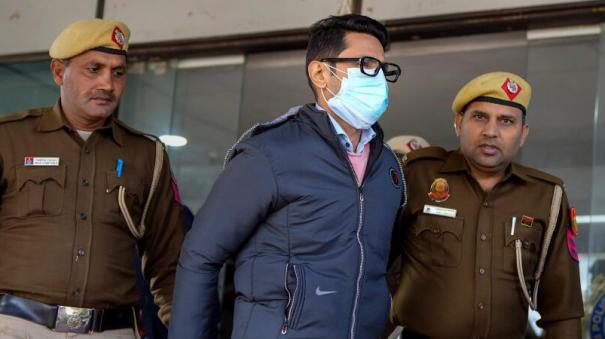 Bangalore: From New York City, USA to Delhi last November. A 72-year-old woman was a passenger on the Air India flight that arrived on the 26th. Shankar Mishra (32), who was traveling with him on the same flight, urinated on a 72-year-old female passenger. Initially, the issue was said to have been resolved through talks between the two parties. However, the lady wrote a letter to Tata Group Chairman N. Chandrasekaran.

Air India CEO Campbell Wilson responded. It said, “This incident is very painful. Our staff should have handled this more properly. One pilot and 4 crew members have been fired for this. We are reviewing the practice of serving alcohol on flights. “We have banned Shankar Mishra from flying on Air India for the next 30 days,” he said. Shankar Mishra has been sacked by the US financial services company ‘Wells Borgo’ where he was working.

The Delhi Police registered a case in this regard and formed 4 special teams to arrest Shankar Mishra from Mumbai. Finally they found him in Bengaluru through cell phone signal.

Police arrested Shankar Mishra while he was lurking at his sister’s house in Whitefield on Friday night. He was then taken to Delhi by air and produced in the Patiala court yesterday afternoon.

Advocate Manu Sharma, appearing on behalf of Shankar Mishra, demanded that Shankar Mishra should be granted bail in this case considering his health condition. The lawyer appearing for the government objected to this. He also demanded to allow the police to interrogate him for 3 days.

After hearing the arguments of both sides, Justice Anamika said, “Shankar Mishra has not cooperated with the investigation and has been absconding. So he cannot be granted bail. I order him to be remanded in judicial custody for 14 days.