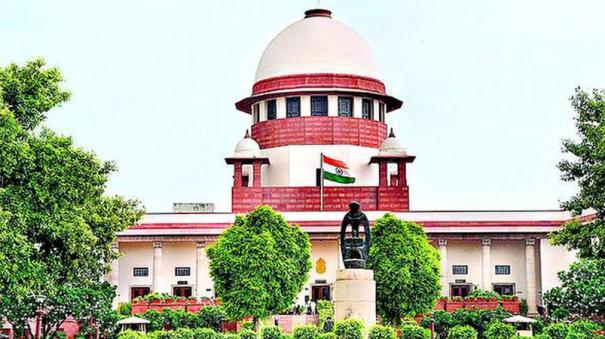 New Delhi: The Supreme Court has granted additional time to the central government to respond to the case filed by Subramanian Swamy seeking to declare the Ram Bridge as a national heritage symbol.

Hindus believe that the limestone bridge-like structure from Dhanushkodi to the east coast of Sri Lanka is called Rama Palam. Senior BJP leader Subramanian Swamy filed a case in the Supreme Court saying that the Setu Samudra project will destroy the Ram Bridge and therefore, the project should be banned. In this case, it was explained that the Setu Samudra Project will be implemented by the Central Government so that there is no damage to the Ram Bridge.

In this case, in 2015, Subramanian Swamy again filed a case in the Supreme Court to declare the Ram Bridge as a national heritage symbol. In that petition, he had sought withdrawal of the case filed seeking a stay on the Setu Samudra project if the Ram Bridge is declared a monument.

When this case came up for hearing last time, Subramanian Swamy, who was present, said, “This case has been pending for the last 8 years. The question raised in this case is whether Ram Bridge can be declared as a traditional ancient symbol or not. However, the central government is delaying its position without filing a reply petition.” He accused that.

The case came up for hearing today in a session presided over by Chief Justice Chandrachud of the Supreme Court. Then Subramanian Swamy again alleged that no decision has been communicated on behalf of the central government.

Then the Chief Justice interrupted, why has the answer not been given yet? He questioned. Responding to it, Union Solicitor General Tushar Mehta said, “The matter is being discussed. Therefore, no decision has been taken on the matter. Therefore, the case should be adjourned to the first week of February.”

Objecting to this, Subramanian Swamy said, “They have already said that a decision has been taken in this matter, but now they are changing it. Since this is a matter related to the Cabinet, a summons should be sent to the Cabinet Secretary.”

The Chief Justice refused to accept this and ordered the central government to respond to this petition within the first week of February. He further adjourned the hearing of the case to the second week of February.