Casillas: Dubai is the favorite destination for the most famous sports stars in the world 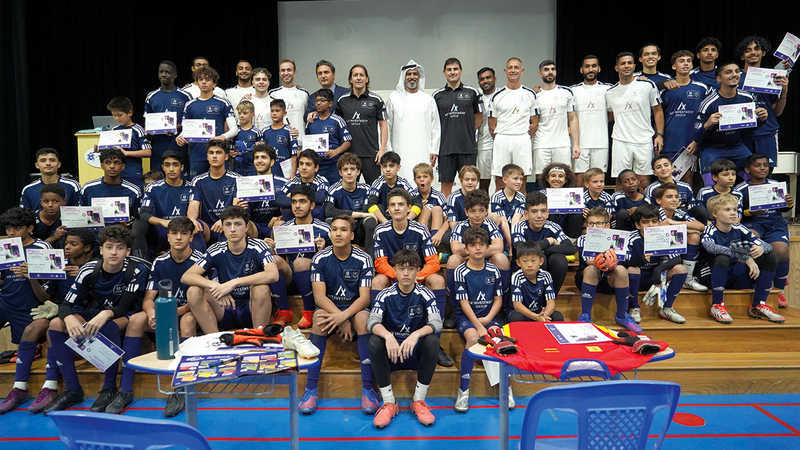 More than 90 goalkeepers and their coaches in sports clubs and private academies completed their training program at the center launched by world goalkeeper Iker Casillas in Dubai for the first time outside Spain, in partnership with the Spanish Knights Club and in cooperation with the Dubai Sports Council. To attract and develop sports talent.

The participants in the program received certificates of completion of training from the former goalkeeper and captain of the Spanish national team, the 2010 World Cup champion, the 2008 and 2012 European Nations champion, and the European champion several times with Real Madrid, Iker Casillas, in the presence of the Director of the Sports Development Department at the Dubai Sports Council, Ahmed Al Mahri, and the star of Real Madrid and the national team. Former Spain Michel Salgado.

And a press statement stated: “The training program for goalkeepers focused on the technical, tactical, physical and psychological aspects, and measurements, and the training took place according to the approved Spanish model for technical cadres for training goalkeepers, in addition to direct supervision by international star Iker Casillas, with his great experience in this field.” field, along with the Spanish coaches who directly supervised the training process.

International star Iker Casillas expressed his happiness with the great success achieved by the program in its first session, and the wide participation of goalkeepers, who numbered more than 90 participants, praising the level reached by the participants and the development they achieved after completing the training program. He also thanked the Dubai Sports Council for its great support for the program. .

Casillas confirmed that he chose Dubai as the best place to host his first training center outside Spain, to provide his services to goalkeepers in sports clubs and private academies in addition to amateurs from eight to 21 years old, in addition to targeting goalkeeper coaches, as its launch in Dubai came after a study. Extensive and accurate details of the success opportunities offered by Dubai for such projects, based on its possession of modern sports facilities designed according to the best international standards, and a strong infrastructure, as Dubai provides stadiums, tracks and places for practicing sports, whether in open spaces or indoors, and also provides facilities A large city that encourages residence and investment in it, and brings together communities from most countries of the world who live in peace and harmony.

Casillas also stressed that Dubai is the favorite destination for the most famous sports stars in the world, praising the pioneering role that Dubai plays in the field of sports in general and football in particular, and that Dubai is a football center in the region. The Dubai Sports Council is keen to support initiatives and programs that achieve its strategic goals, as the Council launched many initiatives and programs aimed at developing national talents in clubs, most notably the future goalkeeper and future striker program.