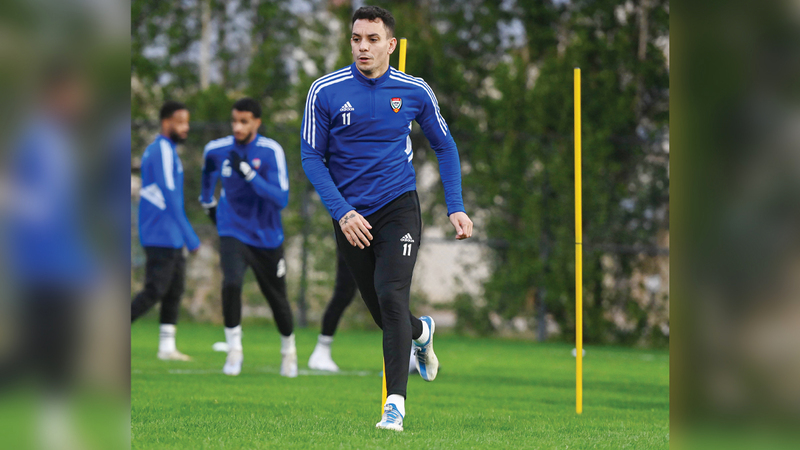 The striker of the national team and Al Ain Club, Kaio Canedo, described the Gulf Cup for national football teams as a “mini-World Cup”, saying that he knows the extent of the Gulf countries’ interest in the tournament, its historical value and the distinctive atmosphere surrounding it. He said that “Al-Abyad” aims to be called “Gulf 25” and did not come to Iraq to “take a walk.”

Today, the national team will play its first match in the Gulf Cup, which will be hosted by the Iraqi city of Basra, when it will meet the Bahraini national team in the second group competitions, while Kuwait will meet Qatar in the same group.

Caio told Emirates Today: The national team includes a list of distinguished players, and coach Arwabarina has a strong squad, and our goal is clear, the title only, indicating that everyone is excited for the start of the journey and that they realize what is required of them. The “Gulf 25” will be the first tournament for Caio, who was called up to the “Al-Abyad” list for the first time in January 2020. Throughout the past period, he remained a key player in “Al-Abyad”.

And Caillou’s last goal in an official match was during the 2-1 defeat by Australia in the Asian play-off qualifying for the World Cup in Qatar. And he stressed that “the players will play the Gulf championship in the same spirit they were in the World Cup qualifiers meeting with South Korea, which they won 1-0.”

Cayo said that he was keen to learn a lot about the Gulf championship from his colleague in Al Ain, Mohammed Ahmed, who was with the national team during the victory in the “Gulf 21” title that was held in Bahrain.

Cayo confirmed, “Mohamed Ahmed told me everything about the championship, how wonderful it is, and how important it is for all Gulf countries,” noting that the players will strive to make the fans happy in “Gulf 25.”

On the other hand, the national team player, Majed Hassan, confirmed in a press statement that the players seek to focus on facing Bahrain as the opening match in the tournament, and that achieving a positive result would support Al-Abyad’s career in the tournament. He praised the atmosphere that prevails in the national team camp before the important confrontation, pointing out that everyone is working with high morale and the heart of one man, with the aim of raising the flag of Emirati football in this important Gulf forum.

• “We will play the Gulf Cup in the same spirit that we won over South Korea in the World Cup qualifiers.”