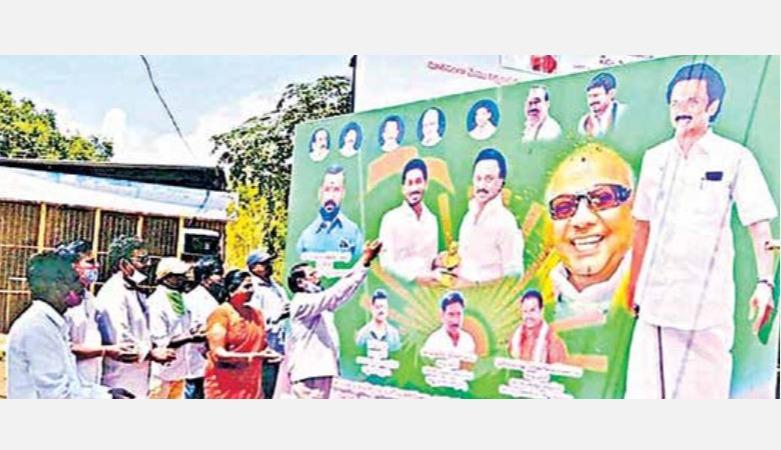 
Banners and banners are being erected in the village of Cheruvu Kommapalayam near Ongole in Prakasam district of Andhra Pradesh to celebrate the inauguration of DMK leader MK Stalin as the Chief Minister of Tamil Nadu.

At a time when Andhra and Tamil Nadu were all together, many kings ruled the region. Ancestors (grandfathers) of former Tamil Nadu Chief Minister Karunanidhi served as scholars in the court of the Vijayanagara kings during this period.

From there their ancestors served the king of Venkatagiri as Nagaswara scholars in the kingdom of Bellur near Ongole. At that time, a total of 150 acres of land was given to their descendants as a grant of 30 acres each to 5 families on behalf of the Pelluru principality. In which they were farming. During the drought, they sold their lands and moved to Thanjavur. Even now their ancestral family lives here.

In 1960, Karunanidhi came to Eluru, Andhra Pradesh. Karunanidhi chaired a meeting of the Detective Novelists’ Association. Novelist Jalandhar Balakrishna says that he then inquired with interest about the Cheruvu Gompalaiyam, the town where his ancestors lived, the descendants there and the people who now live there.

Many Nagaswara artists from the town visit Thiruvaiyar to attend the Thiyagaraja Worship Festival. It is customary to meet Karunanidhi in Chennai and leave.

In Mytishchi, they said goodbye to the pilot-cosmonaut Vladimir Shatalov

Security guard who came on a bicycle and robbed the door .. taking a video!

Mauricio Ochmann: Who is Paulina Burrola, the actor’s new partner?

Al-Anbari: I did not ask Sharjah’s players to defend only … a draw is better than a defeat

Mother dies in accident 2 weeks after adoption in Kerala: Awful when I went to introduce relatives