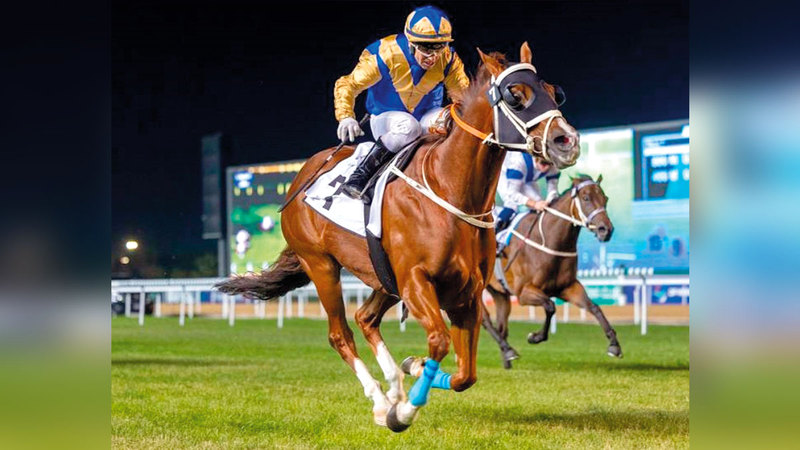 The horse “Celtic Voyager” opened the victories of the “Blue Racing Syndicate” team and its coach, Mohamed Mardoud, at the “Maidan” track, by winning the title of the seventh and final round of the 12th race in the world track racing season, which was organized by the Dubai Racing Club the day before yesterday, and sponsored its seven runs « Al Tayer Motors », with a total prize pool of 630,000 dirhams.

Knight François Herhoudt succeeded in leading Celtic Voyager to stay close to the lead horses during the early stages of the course of the seventh half, before unleashing him in the last 400 meters, crossing the end line of the half that extended for a distance of 1200 grassy meters, in first place, with a time of one minute. And nine seconds and 46 parts of a second, ahead of the “neck” difference from the second-placed horse, “Pershan Empire”, owned by Ahmed Al-Hashemi, under the supervision of coach Hamad Al-Marar and the leadership of the jockey, Ran Scott.

And the first victories of the evening began with the horse “Raji” snatching the slogan of Yas Racing and under the supervision of coach Majid Al-Jahuri, the title of the opening race, which was devoted to purebred Arabian horses for a distance of 1900 sandy meters.

In the rest of the results, the horse, “Legend of Cannes”, bid farewell to its owner and coach, Fawzi Nass, in the “beginner” category, by winning the title of the second half, which extended for a distance of 1600 grassy meters, before the horse, “Grand Dubai”, gave its owner Hamid Rashid Ali Al-Raihi and coach Musabah Al-Muhairi the title of the third round, which It is dedicated to horses of the “Handicap” category, for a distance of 2000 meters sandy.

The fourth round, which was allocated to the horses of the “Handicap” category for a distance of 2000 grassy meters, saw the horse “Zukini” owned by the owner Hamad bin Harmash and under the supervision of coach Ahmed Bin Harmash, snatch his second successive victory for this season, before the title of the fifth round dedicated to the “Handicap” category went to a distance of 1800 A grass meter in favor of the horse “Invincible” with the logo of the “Bursley Syndicate” for racing.

“Hyde Park” by Sultan Ali, under the supervision of coach Salem bin Ghadir, won the sixth race title, which ran for a distance of 1600 meters sandy, and was dedicated to horses of the “Handicap” category.