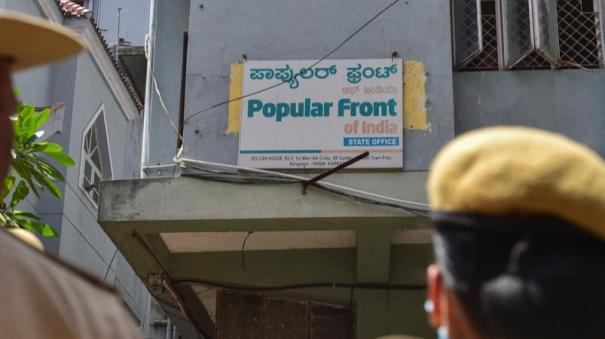 Delhi: The Union Home Ministry has issued an order banning the Popular Front of India for five years. It is said that the ban has been imposed due to illegal activities.

The Popular Front of India (PFI), which was launched in 2006, has branches in 24 states across the country. There have been complaints that the administrators of this organization are involved in various riots and massacres. According to this, officials of the National Investigation Agency (NIA) and the Enforcement Directorate conducted surprise raids in 15 states across the country, including Tamil Nadu, on the 22nd. 45 people were arrested then. Important documents were seized. The investigation revealed that the BFIs had deposited Rs 120 crore in banks and had brought a large amount through hawala from the Gulf countries.

In this case, for the 2nd time across the country, a search was conducted yesterday at the offices of the BFI and the houses of the administrators. The test lasted for more than 8 hours in 8 states namely Delhi, Uttar Pradesh, Madhya Pradesh, Maharashtra, Gujarat, Kerala, Karnataka and Assam.

NIA officers and Delhi Special Force police conducted raids in Shakin Bagh and Jamia Nagar areas of the capital Delhi. 144 Prohibitory Order has been issued in these areas as a precaution. 32 people were caught in Delhi.