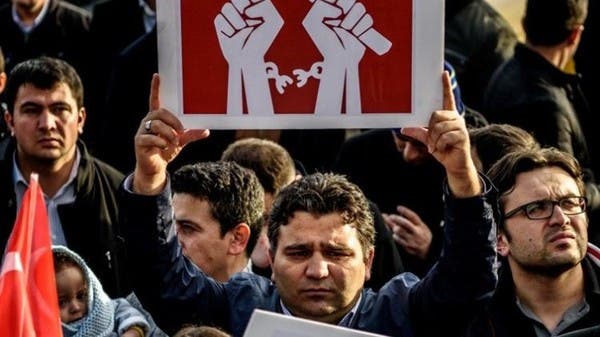 With the end of 2021 approaching, a source in the Turkish Press Syndicate revealed that the authorities had detained dozens of journalists this year only, on various charges, most notably spreading “terrorist” propaganda in favor of the Kurdistan Workers’ Party, which is banned in Ankara, or the “service” movement led by Fatah. Gülen, who is accused by Turkish President Recep Tayyip Erdogan of being behind the failed coup attempt that took place in mid-2016, after which dozens of journalists were detained after they were accused of participating in it.

Gökhan Dormus, head of the Turkish Journalists Syndicate, known as TGS, told Al Arabiya.net that “at least 49 journalists have been detained during the current year during their media coverage,” adding that “all of them were released later in varying periods, However, there are still 34 other journalists who have been behind bars for years and have not yet been released.”

He continued, “Although there has been a slight decrease in the procedures for arresting journalists in the current year compared to 2020, it is impossible to say that the judicial control measures applied against them have decreased. outside the country or prevent them from practicing their profession.

The numbers cited by Dormusch regarding journalists who have been detained for a short period or who are still behind bars are limited to those who have obtained membership in the union he heads, which means that there are other media workers who were imprisoned this year without the union mentioning their names for not obtaining its membership .

Dormush stressed that “the number of journalists imprisoned for years has decreased this year to 34 journalists after the execution of judicial rulings against them, but it is unfortunate that government pressure on journalists has not stopped, as they are detained from time to time and subjected to violence.”

He also pointed out that “the authorities continue to impose many restrictions on various media institutions, and for this reason dozens of journalists are deprived of their economic and social rights, and consequently, they sometimes face unemployment, especially when the government shuts down the media outlets in which they were working, which has been a constant recurrence since 2019. “.

According to a report issued earlier this year by the French press organization “Reporters Without Borders”, 90% of the Turkish media are either controlled by Erdogan’s government, or by businessmen close to him, a matter that angered civil organizations defending public freedoms in the country. Repeatedly.

The government’s control of a large number of media outlets has led to the absence of an independent press in Turkey. The authorities’ closure of hundreds of media outlets during the last failed coup attempt against President Erdoğan’s rule also led to a decline in the role of non-governmental outlets.

Since the coup attempt, the authorities have arrested and investigated hundreds of journalists, and as a result dozens of them fled abroad.

Nevertheless, Turkish courts issued sentences in absentia against some of them, including the well-known journalist Jan Dundar, who resides in Germany. The authorities issued several sentences against him in absentia for long prison terms, including a life sentence.