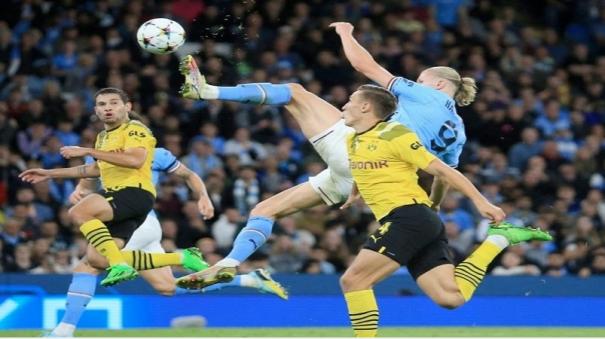 Erling Holland, a 22-year-old soccer player, has stunned the current Champions League series by flying the ball into the net in an acrobatic fashion. He is currently playing for Manchester City. His spectacular goal helped Manchester United win 2-1 against Borussia Dortmund.

The match was played at the Etihad Stadium in Manchester. Both the teams are in Group ‘G’. Dortmund led 1-0 after 80 minutes of the match. But Manchester City won the game by scoring a goal in the last 10 minutes.

Hollande took the ball from Manchester United’s Cancelo, sent it flying through the air and tapped the ball in with his back heel to score. His goal is said to be reminiscent of Dutchman Cruyff and Swede Zlatan Ibrahimovic.

Holland has been raining goals this season. He has scored 26 goals in 21 Champions League matches so far. He is averaging a goal every 62 minutes.