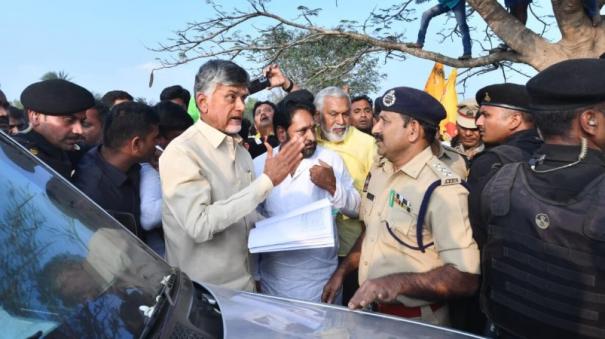 garbage: Former Chief Minister of Andhra Pradesh Chandrababu Naidu arrived yesterday afternoon for a 3-day tour of Kuppam constituency, Chittoor district. Volunteers gave him a rousing welcome by putting up a huge garland with the help of a giant crane at JP Kothuru on the Karnataka-Andhra state border.

But when Chandrababu Naidu tried to drive to Kuppam constituency from there, the police stopped him at Petthuru. They gave him a copy of the order stating that no one should hold a public meeting or procession under Police Act 30 issued by the Andhra Pradesh government. But Chandrababu Naidu refused to buy it and argued with the police.

Then he told the reporters: I had announced that the garbage was coming last month. After issuing the order, Chief Minister Jagan took a procession in Rajahmundry on Tuesday (the day before yesterday) and held a public meeting. A justice to YSR Congress. A Justice for Telugu Desam Party? What justification is this? Thus spoke Chandrababu Naidu.

Then he went on pilgrimage and met people. In every house, women performed aarti and gave him a warm welcome.

Earlier, Telugu Desam Party members who were trying to go to Pethuru to welcome Chandrababu Naidu were stopped by the Kuppam police and beaten with batons to disperse them. Due to this, there was a commotion for a while.