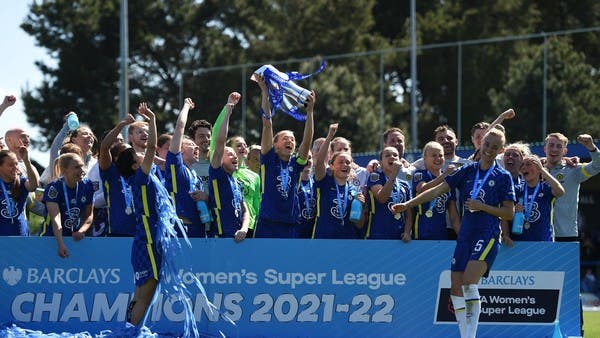 Chelsea retained the English Premier League Women’s Football Championship for the third consecutive season, after their exciting 4-2 victory at home to Manchester United, on Sunday, in the 22nd (final) stage of the competition.

Chelsea’s tally rose to 56 points, one point ahead of its closest rivals, Arsenal, who beat West Ham United 2-0, while Manchester United remained in fourth place in the competition’s standings with 42 points, behind Manchester City, which was third with 47 points. , after its 4-0 victory over Reading.

Chelsea had to overcome the obstacle of Manchester United, in order to officially settle the title in his favor this season, without waiting for the result of the Arsenal and West Ham meeting, which took place at the same time.

Marta Thomas advanced for Manchester United in the 13th minute, before Irene Cutbert equalized for Chelsea in the 18th minute, but the visiting team quickly advanced with another goal through Ella Ton in the 25th minute.

Chelsea rose in the second half, scoring the equalizer through Sam Kerr in the 46th minute, while Guru Ritten scored the third goal in the 51st minute.

Kerr scored the fourth goal for Chelsea and her second personal goal in the 66th minute, to get the blue team the three points and officially crowned the title.