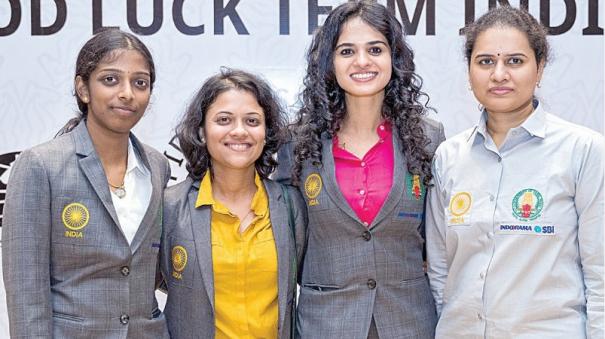 India’s dream of winning gold in the Women’s Chess Olympiad is expected to come true this time on home soil. India A has been given the top spot in the tournament rankings.

With the absence of China and Russia teams, the Indian team will have to put up a strong field and tread carefully. On one hand, playing at home is in India’s favour, but managing the rising expectations could be a challenge.

Talk of medals dominates most conversations around players. Coaches Abhijit Kunde and Swapnil Thobate could play a big role in handling this.

In the Indian A team, Koneru Hampi, D. Harika, R. Vaishali, Thania Sachdev and Bhakti Kulkarni are in the cast. Having Koneru Hampi in the team is a big strength. Being fully pregnant, Harika may decide to play depending on her condition on the day of the match.

Vaishali, who is making her debut, has a wonderful dimension to her game. Already a medalist, Tania Sachdev, who will be participating in the Olympiad for the 7th time, has great expertise and experience in handling the challenges on the boards. Bhakti Kulkarni’s barm may play an important role.

The Indian B team is ranked 12th in the tournament rankings. The squad includes rising stars Vandika Aggarwal and national champion Divya Deshmukh along with seasoned Padmini Raut, Soumya Swaminathan and Marianne Gomez. The B team is expected to accumulate wins in the opening rounds without any pressure as there are very low expectations.

Teams from Ukraine and Georgia are ready to challenge the Indian team. Led by former women’s world champion Maria Musichuk, Ukraine has won a medal at every Olympiad since 2012. The team that won the title in 2006 lost to China in a tie breaker in 2018 and won the silver medal.

Ana, Maria’s sister, is the second strongest player in the team. Ana is the fourth player to reach 2600 points in the Women’s Chess Rating. Also a former World Championship runner-up and winner of World Rapid and Blitz titles.

Ana Ushenina is another former world champion in the team. The other two players have more than 2400 points in the rating. Due to this, the Ukrainian team is seen as a tough competition.

Four-time winners Georgia are three points behind Ukraine in average player ratings. Georgia is considered one of the teams with a chance to beat them. The top ranked Nana Jagnitze, Leila Javakishvili, Nino Batsiashvili and Meri Arabitse have rating points ranging between 2531 and 2426. This reflects the team’s performance.

A young Kazakhstan side could prove to be a team that can test the top 3 teams in the tournament rankings. No. 4 Kazakhstan will feature 2017 World Junior Women’s Champion Zhansaya Abdulmalik (age 22), 2016 World Junior Women’s title winner Dinara Sadukasova (25) and reigning World Women’s Blitz Champion Bibisara Assoubayeva (18). It is challenging. Poland, France, USA, Azerbaijan and Bulgaria are also challenging teams.