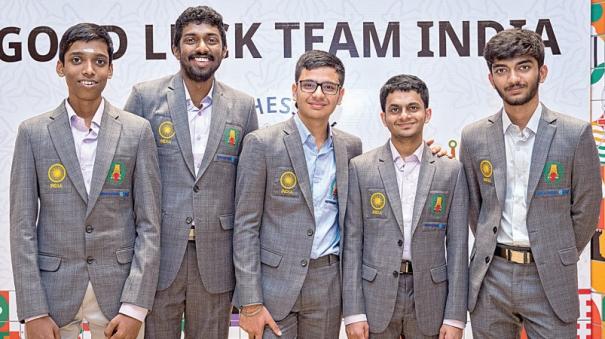 Chennai: The opening ceremony of the 44th International Chess Olympiad concluded yesterday in a grand manner at the Nehru Stadium, Chennai. Following this, the matches will begin today at 3 PM at the Four Points Sheraton Resort in Mamallapuram.

A total of 700 digital chess boards will be used for the tournament. 1400 players playing on these 700 boards simultaneously can be watched through the website.

With Russia and China not participating in the series, all eyes are back on the American team. 4 out of 5 players in that team are ranked 14th in the world.

With a strong squad, the team is serious about winning the gold medal for the 7th time. In this 11-round series, the American team is seen as having the ability to bounce back despite the setback.

The Indian team is expected to be on the medal stand this time. Meanwhile, world champion Magnus Carlsen is on the verge of winning a medal for the first time for the Norwegian team, which is ranked 3rd in the competition. Based on the strength and form of the various teams, around 10 countries could advance towards the medal hunt.

Shankland, the lowest-ranked player in the United States, was the only player in the team with India’s top-ranked B. agrees with Harikrishna’s assessment. This will help keep things moving forward when hosts India consider their chances of winning the gold.

Promising Vidit Gujrati, youngster Arjun Erikaisi, who can consistently perform in SL. Narayanan and the highly experienced K. Sasikiran are the other members of the group. Before looking at the prospects of other countries, it is necessary to mention the Indian team that has already raised the expectations of the chess world.

Gukesh, Nihalserin, R. Pragnananda. Raunak Sathwani is a young talent. The presence of an experienced P. Athipan with them has increased the chances of winning a medal.

Also seen as a threat to other teams. Six years later, Karlsson is playing for Norway. Carlson last played in the 2016 Olympics.

Norway, which was ranked 12th then, was ranked 5th and India 4th. Spain and Poland are also well balanced. Both these teams are ahead of Azerbaijan in the competition rankings.

Overall, player form makes a bigger difference in team championships than the average rating points of each team’s top four players. For some, fame can be a burden. This can sometimes favor lesser-known teams that are lower in the standings.