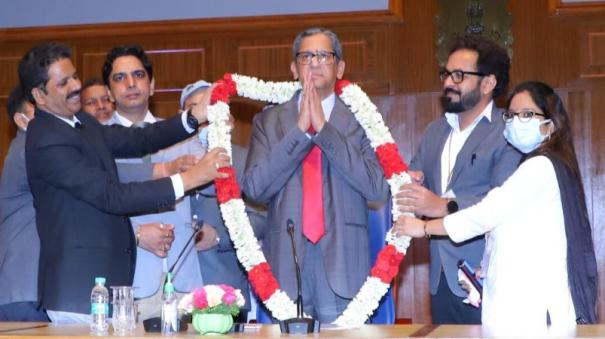 He heard a public interest petition filed regarding free announcements by political parties during elections.

I hope I have worked as per your expectations. I did my duties as a magistrate to the best of my ability. We have successfully appointed 234 judges in the High Courts.Thanks to the support of our brother and sister judges in the Supreme Court and Collegium. Delhi High Court has many special features. The number of cases here cannot be compared with any High Court. Delhi High Court Judges are hard workers who work till 8 pm. Many come in the morning and leave at night. It would surprise me. This is what he said.

Senior advocate Dushyant Dave tearfully spoke at the farewell event. He said, “I am speaking on behalf of the people of this country. You acted in favor of the people and were the judge of the people. You upheld their rights and the Constitution,” he said.

Addressing the farewell function, Chief Justice of the Supreme Court N.V. Ramana said, “Pending cases in the courts are the biggest challenges. Not much attention can be paid to list the cases coming up for hearing in the Supreme Court. I am sorry for this. Modern technology and artificial intelligence should be used to solve this problem,” he said.