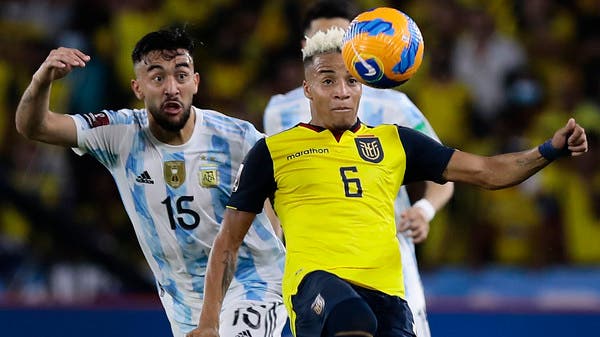 Following the failure of its national team to qualify for the 2022 World Cup in Qatar, the Chilean Football Association submitted a complaint to the International Federation of the Game against Ecuador, the guarantor of its qualification, against the background of allegations about the false nationality of one of its players participating in the South American qualifiers for the World Cup.

The Chilean Football Association stated that full-back Byron Castillo did not have Ecuadorean citizenship, but was born in Colombia, to file a complaint with FIFA about the use of a false birth certificate, false declaration of age and false nationality.

Castillo, 23, played the first leg of the qualifiers against Chile, the first of which ended in a goalless draw in Quito on September 5, 2021, and the second of Ecuador’s 2-0 victory on November 17 of the same year.

Chile ranked seventh in the joint group in the South American qualifiers for the football wedding in Qatar, 7 points behind Ecuador, the last fourth qualifier for the World Cup, to accompany the leaders Brazil, Argentina and Uruguay.

On the other hand, Peru will play the fifth international play-off with the winner between the UAE and Australia on June 13th at Ahmed Bin Ali Stadium in Qatar.

In the event that FIFA accepts the complaint of the Chilean federation and announces the victory of its national team in the two matches, this will allow it to reserve a qualifying position for the finals, bearing in mind that the draw placed Ecuador in Group A along with host Qatar, Senegal and the Netherlands.

Chilean Football Association lawyer Eduardo Carlizzo told channel Nacional de Chile that his Ecuadorean counterpart knew that Castillo had a Colombian birth certificate, and that the evidence had been sent to FIFA.

The Chilean Football Association wrote in its statement: “The world of football cannot turn a blind eye to a lot of evidence and the practice of gross and willful irregularities in the registration of players cannot be accepted, especially when it comes to an international competition.” Fair play should be on and off the field.

According to the same source, investigations conducted in Ecuador, including a report by the National Civil Status Office, the highest authority in this country, revealed inconsistencies in the birth certificate provided by the player.

He added: A commission of inquiry from the Ecuadorean Football Federation, which aims to clarify irregularities in the players’ files, concluded that the player is Colombian.

However, the Federation of Ecuador insisted in a statement that Castillo is duly registered with the competent legal authority and has all valid national documents.

Under FIFA rules, a player cannot represent a country he does not hold.

Chile’s complaint alleges that Castillo was born in the Colombian city of Tumaco on July 25, 1995, and not in the Ecuadorean city of Palais on November 10, 1998.

Castillo wore the shirt of the Ecuadorian national teams under 17 and 20 years before joining the first team. He participated for the first time in September 2021 and played in 8 matches in the World Cup qualifiers for Qatar, and contributed to four victories, two draws and two defeats.

Castillo began his career with Norte America, before moving to Barcelona, ​​Guayaquil, one of the country’s most prominent clubs.