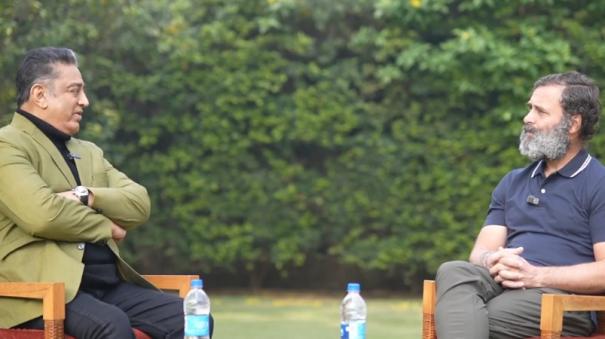 New Delhi: Former Congress president Rahul Gandhi has said that China has the same policy on India as Russia has on Ukraine.

Rahul Gandhi has released a video of his conversation with actor Kamal Haasan on YouTube. In it, Rahul Gandhi says: “China has the same policy on India as Russia has on Ukraine. Russia has warned Ukraine not to have strong ties with the West. If you violate, we will change your border, it said. That is what Russia is doing right now.

Whatever Russia’s policy on Ukraine is, China’s policy on India also applies. What is China telling us? China says be careful what you do. Otherwise it says we will change your geography. We will enter Ladakh; China says it will enter Arunachal Pradesh. I see China following Russia’s approach. China is currently building the platform for that.

In the 21st century security has become an absolute thing. Our government’s account in this matter is very wrong. The definition of war has now changed. Now one does not fight only on the border. We have to fight everywhere. The most important thing in the 21st century is that there should be unity and harmony within the country. People should not fight each other. The country needs peace and vision.

The point is not that there should be no war. You have to take care that war does not happen against you. China sees a weak economy, confusion, lack of vision, hatred and anger in India. So, they can do whatever they want. This is what is happening in Ukraine.

So as an Indian, I don’t want to be a warmonger. But I want the people of the country to know that the problems at the border are related to the problems inside the country. If Indians are fighting each other the economy will not grow; Employment will not be created. This will become an opportunity for our enemies,” said Rahul Gandhi.