No Result
View All Result
Latest News
The EU warned of the danger of a “loneliness pandemic” 26/07/2021
Rafo Raéz returns to the stage with a special show prior to National Holidays 26/07/2021
Can a mother with Govt infection breastfeed her baby? 26/07/2021
I apologize: Tamil Nadu athlete melted out of the second round of the Olympic fencing competition 26/07/2021
A hysterical celebration at the home of the Jordanian champion, Saleh Al-Sharbati, after securing an Olympic medal (video) 26/07/2021
Next
Prev
Home World

China’s rains “the heaviest in 1,000 years”… and the bombing of a dam to divert water 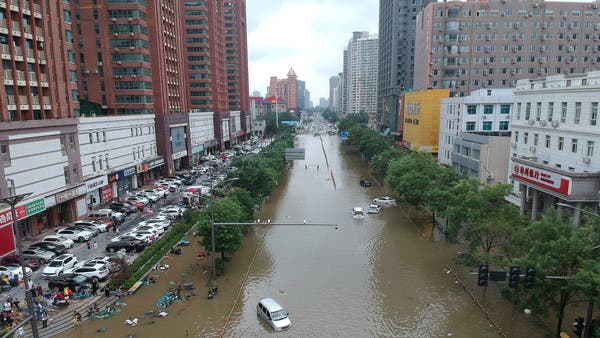 
Large swathes of central China’s Henan province were inundated on Wednesday and at least 25 people died in the provincial capital, Zhengzhou, after the city experienced its heaviest rainfall in 1,000 years, meteorologists said.

Water floods the streets in Zhengzhou

With more rain expected across Henan over the next three days, the government of Zhengzhou, a city of more than 12 million people that lies on the banks of the Yellow River, said 12 people died in a flooded subway line, while rescuers were rescued. more than 500.

A video clip circulating on social media on Tuesday showed passengers of a metro train standing in the dark, murky flood waters reaching their chest level, while an underground station turned into a large pond.

Local media quoted meteorologists as saying that the amount of rain that fell in Zhengzhou over the past three days occurred “once every 1,000 years.” .

Scientists told Reuters that China’s rains are almost certainly linked to climate change, such as the recent heavy rains in the United States and Canada and the floods that occurred in Western Europe.

Many train services across Henan Province, a major logistics hub in central China, have been suspended. Authorities also closed many highways and flights were delayed or canceled.

The Chinese army also blew up a dam to release floodwaters that threaten one of its most populous provinces. The operation came late Tuesday night in Luoyang City, Henan Province.

More than 100,000 people have been evacuated to safety.

Analysts predicted growth in demand for computer games and consoles

The left is a bundle of contradictions; BJP can never come to power in Kerala: Interview with Congress senior leader PC Sacco

In the Kuban, a Belgian shepherd dog saved three lost people in a year