Chwamini..a “talker” who lives his father’s dream and fights racism 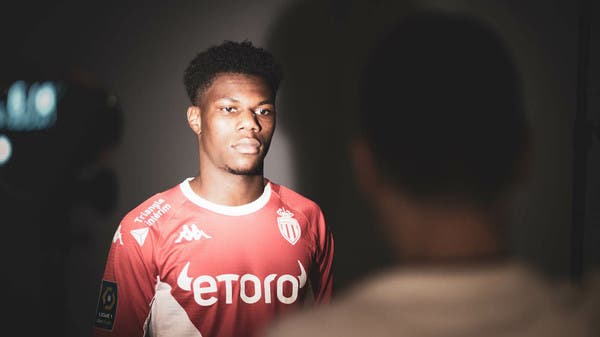 Aurelien Chuamini lives his father’s dream, who failed to reach a professional level during the world of football, and decided to take the adventure again through his eldest son, and the “talkers” became one of the most prominent talents of the game today and a valuable catch for the big clubs.

And press reports indicate that Real Madrid will soon announce the kidnapping of the jewel of Monaco and its official annexation within the next few hours.

His upbringing and his father’s dream

Aurelien was born in January 2000 to his father, Fernand Chawamini, who worked in the field of pharmacy as a factory manager for the production of vaccines, and his mother, an educational consultant, in the city of Rouen in northern France, more than 130 kilometers from the capital, Paris.

He grew up comfortably as a middle-class French citizen of Cameroonian descent. His love for football emerged from his early childhood, as he was always interested in watching his father play on the green grass and watch his matches with great passion, Fernand even said that his son was his number one fan, but the father could not Realizing his dream and getting a professional contract.

Child Chwamini was not annoyed with going to school like other children, but he had another defect of which he said: I will not say that I was annoying, but the truth was I was very talkative when I was young, I always loved to talk to my classmates, the teachers were saying to me: Aurelien, shut up a little! But with the passage of time matured and treated that trait.

Beginning of his career

Starting his career at his neighborhood academy, Chwamini quickly became known as one of his team’s most prominent players over time, determined to secure a better future for his family than football, and most importantly, be a dream his father could never live.

The main player’s position on the field at the time was a spearhead, but his coaches noticed his quick ability to recover the ball and possession from the opponent, in addition to his physical abilities, so they decided to move him to the midfield.

The player attracted the eyes of Bordeaux scouts and quickly invited him to tests to join the team’s academy, and indeed Aurelien moved to Bordeaux at the age of 11 to follow another step in his football career, and contrary to what was expected, he did not have a good start, after suffering two horrific injuries before reaching the age of 14 In addition to the loss of his team to the junior championships, and there was no one around him to support him after his parents moved to Lyon, so loneliness was the main negative factor that affected his level at the time.

His career in numbers

Chuamini made his debut for Bordeaux’s first team in July 2018 at the age of 18 years and 5 months, when he came on as a substitute in the 89th minute during his team’s 1-0 victory over Ventspils from Latvia in the European League qualifiers, and his first goal came against the Ukrainian team Maripol less than a month later. On the first participation and in the same competition.

Chuamini defended Bordeaux’s colors in 37 matches (2.701 minutes), during which he scored one goal and assisted another, received 8 yellow cards, and never left the field.

Less than two years later, Monaco bought the player’s contract for approximately 18 million euros, and he appeared in the white and red shirt in 95 meetings, scoring 8 goals and providing his teammates with 7 assists, winning the award for the best young player in the local league for the 2020-2021 season.

At the international level, Chuamini scored his first appearance in the national team shirt during France’s 1-1 draw with Bosnia and Herzegovina in the European qualifiers for the World Cup last September, and after that he played 8 other matches, during which he scored only once, and was crowned the European Nations League title.

Chwamini is a family man, his parents play an important and pivotal role in his life, and this was evident during their interview with “France Football” magazine. Fernand says: During a period of time I noticed that he was not doing well, and that he was satisfied with the minimum. I spoke with him for two hours during one of his holidays, And I asked him why I had suddenly become a regular player, and he said, Well, you’ll see.

In contrast, his mother does not care about his level or whether he played a good game or not, but is always focused on the condition of her son, whether he is well or not.

The player added to “France Football”: After the matches, I interrogate my father and ask him whether I was good or not, but when my mother calls, I realize that she will ask about my condition and health. Currently, her interest in football is increasing, and I think she is making progress in understanding the game.

The player stressed the importance of his parents again during his interview with “CNN”, saying: When I was young, they told me that I could do what I wanted, but I had to be the best at what I do, if I wanted to work in a company I had to be its manager, if I wanted to Being a cook has to work in the best restaurant, that mindset helped me get to where I am now.

During the qualifiers for the last edition of the Champions League, Chuamini was subjected to racist chants in the Czech Republic during his team’s match against Sparta Prague, and he said about her: This was not my first experience with racism, I always received this kind of comments on my Instagram account, I always think that I I should avoid it even though I was finding it difficult.

He continued: What happened to me in Prague was different because I had matured a little and wanted to find a solution, I called the officials of the European Union to a meeting and discuss what could be done, something like brainstorming sessions, certainly I cannot say that racism will end in 10 days, as athletes we have to We fight these things because our impact is greater.

Chwamini has a notebook that he always keeps, and admitted this during a press conference before explaining the importance of the notebook to him during his interview with the official website of Monaco: I try to jot down a little of everything, I have quotes from the great athletes and great personalities of the world, their words inspire and motivate me, I write Also my goals for each match, whether with the club or the national team, according to the next opponent or the general context. Each match has its own details. I am very attentive and like to write down everything I see and hear.

Fiorella Méndez reappears after ampay with Óscar del Portal: “I turned my pain into power”

Anshula Kapoor: Hero’s sister anarchy by removing her underwear in front of the camera… netizens trolling