Clash today in 2nd T20 match | Will the Indian team respond to the Aussies? 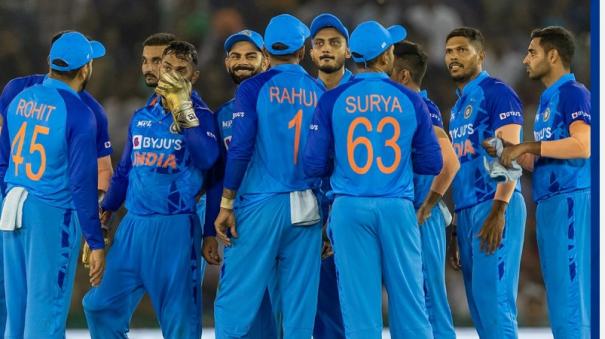 Nagpur: The 2nd T20I match between India and Australia will be held in Nagpur today at 7 PM. The Rohit Sharma-led Indian team is forced to fight for victory as they will lose the T20 series if they lose this match.

Chasing a target of 208 runs, Australia won with 4 balls to spare in the first match of the 3-match T20I series between the two teams in Mohali. The bowling of the Indian team was poor in this match.

Except for Axar Patel, all other Indian bowlers contributed runs. Especially in the final overs, the Australian batsmen scored runs without any difficulty on the balls of Bhuvneshwar Kumar and Harshal Patel. Jasprit Bumrah’s absence highlighted the deficiency in the bowling.

After the England tour, Jasprit Bumrah did not play any cricket matches. He missed the Asia Cup due to back pain. Bumrah was ruled out of the Mohali match as he was said to have recovered from the injury. This has raised various questions over Bumrah’s fitness.

Apart from this, the absence of impactful bowling from all-rounder Hardik Pandya has added to the weakness of the team. Hardik Pandya has given away 126 runs in 14 overs in the last 4 games he bowled. Yuvendra Chahal’s spin batsmen do not pose a threat to the fast bowlers in such conditions.

In this way, the Indian team needs to improve in fielding as well. Indian players missed 3 catches at crucial moments in the first game. This was a huge disadvantage. In terms of batting, KL Rahul’s return to form adds strength. Two more good innings could emerge from Hardik Pandya and Suryakumar Yadav. With Rohit Sharma and Virat Kohli also swinging the bat in the top order, the batting will get extra strength.

As for the Australian team, David Warner, Mitchell Starc, Marcus Stoinis and Mitchell Marsh played brilliantly despite their absence.

All-rounder Cameron Green has won the confidence of the team in his 2nd T20I game. Steve Smith and Tim David are also great contributors. Experienced Matthew Wade has improved his finishing skills and added strength to the team. A win in today’s match will give Australia a chance to clinch the series.

At the same time, it is expected that the Indian team may struggle for victory to avoid losing the series with weak bowling. The VCA ground, where the match will be held, is different from the Mohali ground. Balls don’t bounce that much here. Thus the role of the bowlers will be important. The team winning the toss may place more emphasis on fielding as snow may be an issue.

Nagpur, where the 2nd T20 match will be held, received heavy rain yesterday. The practice of both teams was canceled due to rain yesterday morning. About 45 thousand tickets have been sold to watch this match. There is still a rain warning today, so doubts have arisen whether the match will go ahead as planned.