Clashes between two communities, violence – curfew in Jodhpur till tonight 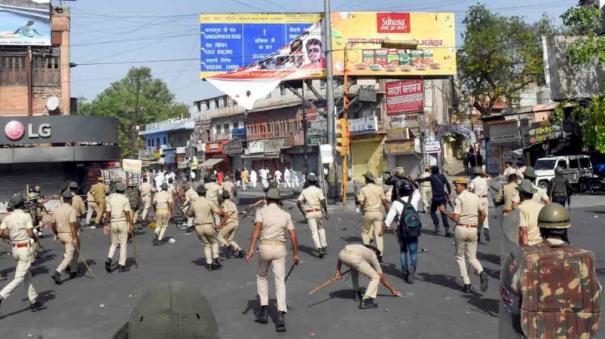 Jodhpur16 people, including 4 policemen, were injured in a clash between two communities in Jodhpur, Rajasthan. A curfew has been imposed in 10 police stations till midnight today due to tension there.

There is a statue of freedom fighter Balmukund Pizza at the Jalori Gate junction in Jodhpur. Near the statue, the minority community hoisted their religious flag the night before last for Ramadan. At that time, there was a dispute between the two sides over the removal of the saffron flag that had already been erected there in honor of Parasuramar Jayanthi.

This, in turn, turned into a conflict between the two communities. Sixteen people, including four policemen, were injured when the two sides hurled stones at each other. The police then chased the violence with tear gas and beating.

Violence erupted again in different parts of Jodhpur yesterday morning, causing damage to vehicles and vehicles. In these areas, the police carried a mild beard and brought the situation under control.

Security has been beefed up across the city of Jodhpur. The Internet service was shut down to prevent the rumor from spreading. Ramadan prayers were held in several places with police protection.

However, curfew has been imposed in 10 police stations in Jodhpur till midnight today (May 4) due to continuing tension. Police have arrested 3 people in connection with the violence.

Chief Minister Ashok Gelad yesterday appealed to the people to keep the peace while respecting the love and fraternal heritage of Jodhpur. He also sent 2 ministers and 2 dignitaries to Jodhpur.

Chief Minister Ashok Gelad held consultations with the Director of Police and other officials on the state law and order situation. He directed the district administration to take all necessary steps to maintain law and order in Jodhpur.

Clashes broke out between two Muslim groups in the Nagaur area in the next few hours following the Jodhpur violence in Rajasthan yesterday.

The two groups first got into an argument during the celebration of Ramadan. Conflict and quarrels ensued at the conclusion of the debate. Informed police rushed to the spot and with the help of locals brought peace there.