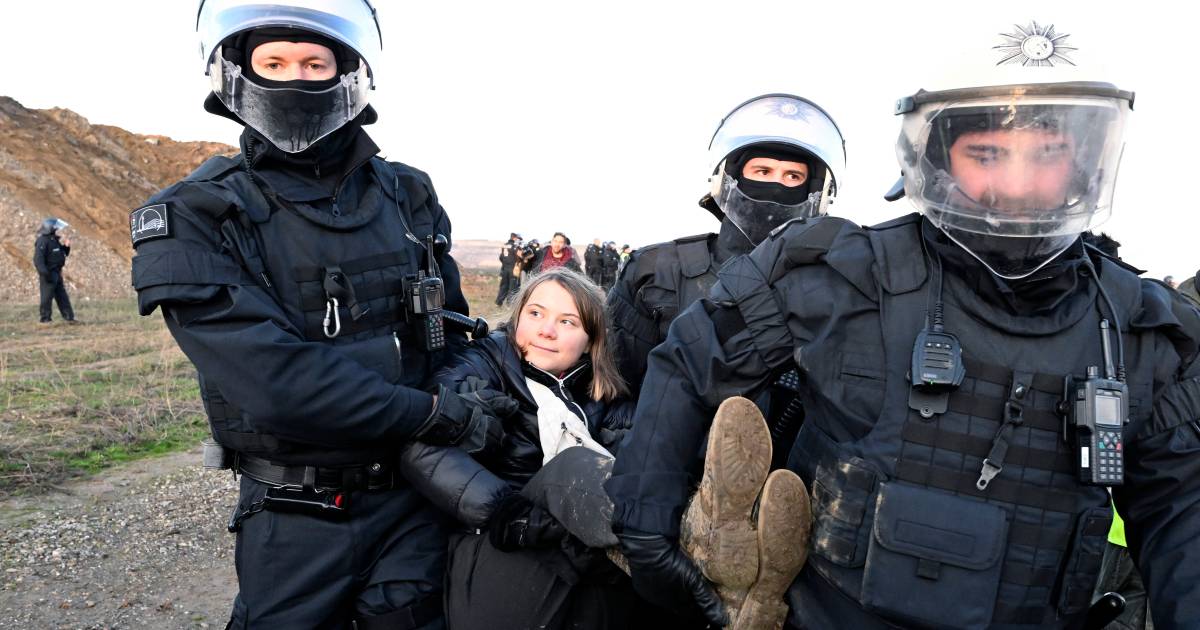 Update / with videoSwedish activist Greta Thunberg was arrested this afternoon at a climate demonstration near ‘lignite village’ Lutzerath. The 20-year-old activist was also removed by the police last weekend.

At Lutzerath, demonstrations have been going on for months against the expansion of a large lignite mine. Last Wednesday, police began clearing the camp of activists who had occupied the construction site. Dozens of people were injured, both on the side of the demonstrators and the police. Thunberg then joined thousands of others in a supportive demonstration.

The evacuation of the camp was completed last weekend, but demonstrations in the region continue. Dozens of activists glued themselves to a street in Cologne and to a government building in Düsseldorf. Near Rommerskirchen, 120 activists occupy a railway line that runs to a coal-fired power station. An excavator was occupied today in the quarry Inden. The police spoke of about twenty activists, a spokesman for the energy company RWE spoke of thirty to forty. In the end, according to the police, everyone left voluntarily.

Thunberg took part in an action today at the Garzweiler mine, 2.9 kilometers from Lutzerath. Some sixty to seventy people demonstrated on the edge of the excavation, a place that has been declared a prohibited area by the German government. They were surrounded by the police for some time during the protest. The activists have not been formally arrested, according to police.

One of the activists is said to have jumped into the mine. It is unclear whether the demonstrator was injured.

German police confirm that she has been arrested. Greta Thunberg was part of a group of activists who moved to the edge. She was then stopped and carried by us with this group out of the immediate danger zone to establish their identity,” says a spokesman for the Aachen police. When Thunberg’s identity could later be established, she was released.

Germany still relies on coal for power generation. Last year, more than 20 percent of the electricity generated was produced with domestic lignite and more than 11 percent with imported coal. After the closure of three nuclear power plants at the end of 2021, the share of coal has even increased compared to the previous year. Germany wants to stop using coal by 2030.