Climate change has the biggest impact on Egypt: Minister Suvelam 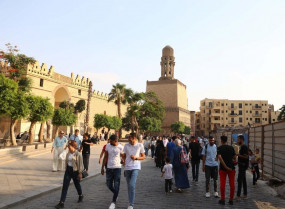 Digital Desk, Cairo. Egypt’s Water Resources and Irrigation Minister Hani Suwellam said on Sunday that Egypt is one of the world’s most affected countries by climate change.

The Egyptian minister invited Egypt to host the 27th session of the United Nations Climate Change Conference (COP27) to be held in the Red Sea resort town of Sharm el-Sheikh in November, news agency Xinhua quoted the Ahram Online news website. The remarks were made during the inaugural session of an Environment and Development Forum on preparedness.

The minister said Egypt was facing problems like water scarcity, high temperatures, erosion and salt water. He said that increased population, unstable water share (from rivers like the Nile) and climate effects have led to shortages of water used for drinking, agricultural and industrial purposes in many countries.

The Minister urged all countries to strengthen cooperation to combat extreme climate. Global climate campaigns such as water sector, food and agriculture have also been emphasized.