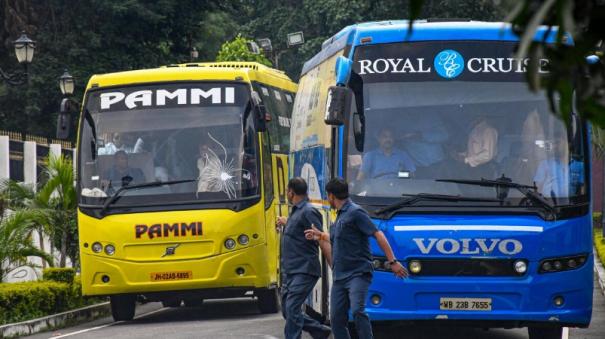 Ranchi: Political chaos continues in Jharkhand over Chief Minister Hemant Soran’s disqualification issue. In this case, efforts are being made to protect the ruling Jharkhand Mukti Morcha (JMM) and its ally Congress MLAs.

In May 2021, a 0.88 acre quarry in Ankara Circle, Ranchi was allotted to the Chief Minister. The BJP accused him of illegally obtaining the Kalquari license by misusing his position.

Chief Minister Hemant Soran and the arguments of the BJP have been presented in the Election Commission for the past 6 months. Following this, the Chief Election Commission sent its decision in a sealed envelope to the Governor of Jharkhand on 25th.

The EC report has not been officially released. However, reports have surfaced that the Election Commission has recommended stripping Chief Minister Hemant Soran of his MLA post. Due to this, confusion continues in Jharkhand politics for the past few days.

In this case, the Jharkhand Mukti Morcha and Congress MLAs returned to the capital Ranchi yesterday evening from the luxury hotel.

It is also said that MLAs will be taken from there to West Bengal or Chhattisgarh.

Jharkhand Mukti Morcha said, “Quarry contract allotted to Chief Minister Hemant Soren has been cancelled. However, BJP is actively involved in conspiracies to overthrow the coalition government. We have taken steps to protect our coalition MLAs.”

3 Congress MLAs were recently arrested in West Bengal’s Howrah district with Rs 48 lakh in cash. The Congress publicly accused the BJP of paying money to topple the coalition government.

In the current environment, 11 MLAs belonging to the ruling coalition are missing, said a BJP MP. Nishikant Dubey said.

Jharkhand Legislative Assembly has 82 MLAs. The support of 42 MLAs is required to form the government. While the ruling coalition has the support of 49 MLAs, if 11 MLAs defect, political commentators have said that the regime will be in danger. However, Chief Minister Hemant Soran did not give any explanation.