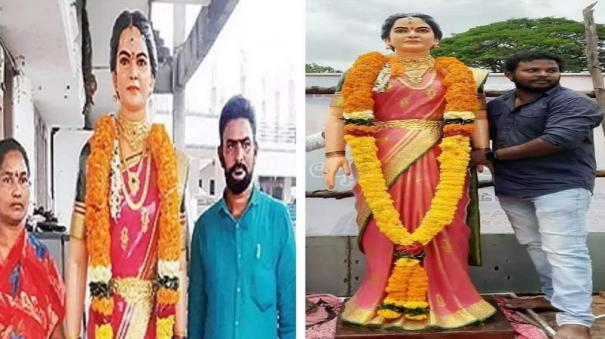 Kakinada: Brothers and sisters celebrated Raksha Bandhan in Andhra Pradesh by placing an idol of their sister who died in a road accident.

Mani (29) is a young girl from Kathipudi village, Sangavaram mandal, Kakinada district, Andhra state. She has a husband and 2 children. Mani died in a road accident 7 months ago. Her death affected not only her husband and children but also her elder sister Varalakshmi, brother Siva and younger brother Raju. As a result, they made a statue of him in memory of his younger sister. In this case, the Raksha Bandhan festival of brotherly affection also came.

It was celebrated by his sister and brothers who were born with him along with Mani’s idol, tied a rope to the village and gave a feast. Sister Mani’s idol was taken in a procession in the town. They celebrated by lighting firecrackers along the way. Every year on the occasion of Raksha Bandhan, all four of them get together and celebrate in a big way. But since Mani died in an accident this year, his co-borns celebrated Raksha Bandhan in his honour.

Younger brother Raju said, “My sister Mani is very kind. He never thought any harm to anyone. His married life was also very good. But Mani died in a bike accident during a festival. Please wear a helmet while riding a bike. It will save your life” said Kan Kalanga.