Colombia .. the first preparations of the Saudi national team for the World Cup 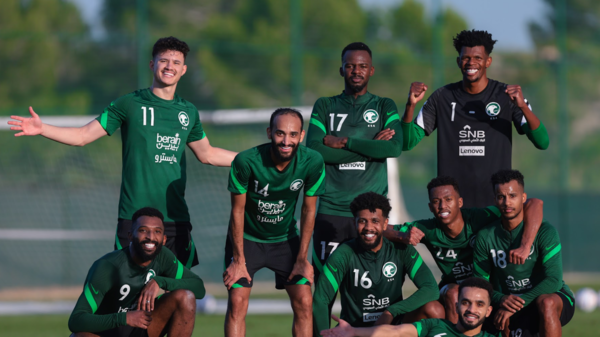 The Saudi national football team will play a friendly match against Colombia on Sunday at the Nueva Condomina stadium in the Spanish city of Murcia, in preparation for the Qatar World Cup 2022.

It will be the first friendly encounter during the first stage of the preparatory camp that Al-Akhdar is holding in the Spanish city of Alicante between May 31 and June 9. As for the second, it will be with the Venezuelan national team on the ninth of this month.

Al-Akhdar players conducted their training session at the La Finca resort stadium under the supervision of French coach Herve Renard.

The player Abdul Rahman Al-Aboud participated in the group exercises after completing his readiness, while Salem Al-Dosari continued his special exercises accompanied by the medical staff, where it was confirmed that he was absent from the confrontation.

Renard seeks to try the largest number of players against Colombia, which is absent from the World Cup finals. Saudi Arabia, which is participating in the World Cup for the sixth time, fell into a strong group that includes Argentina, Poland and Mexico.

On the other hand, Argentine Nestor Lourenço was appointed coach of the Colombian national team on Thursday, after he previously worked as an assistant coach in its ranks at the 2014 and 2018 World Cups.