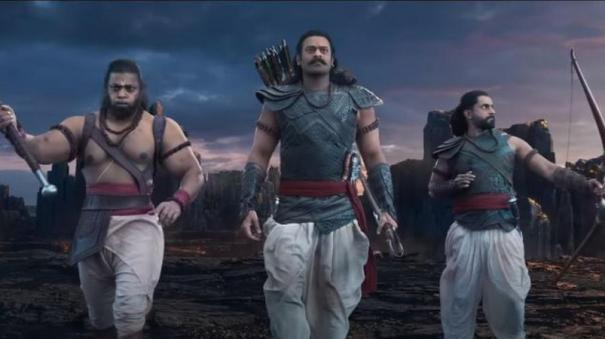 New Delhi: After the release of the teaser of ‘Aadi Purush’ on October 2, Hindu organizations and BJP leaders have protested against the film. They condemned the film for misrepresenting Rama, Sita, Hanuman and Ravana.

Baahubali fame Prabhas Rama in the upcoming mythological epic ‘Aadi Purush’. The teaser of the film was released in Hindi, Tamil, Telugu, Kannada and Malayalam on October 2 in Ayodhya, Uttar Pradesh. The 1.46 minute teaser went viral on social media.

However, the way in which Rama, Sita, Hanuman and Ravana were depicted in the footage has displeased Hindutva and BJP leaders. Adi Purush’s director Om Rawat has started receiving letters of condemnation saying that the film cannot be released without removing the objectionable scenes.

Narottam Mishra, Home Minister of BJP-ruled Madhya Pradesh, was the first protester among them, saying, “Our holy men have been insulted in this film. Lord Rama and Lord Hanuman are shown in leather garments. Sita Mata is dressed in a sleeveless dress. By this, they insulted the Hindu religion. There is a huge conspiracy behind this. Therefore, we will not allow the release of the film without removing the objectionable scenes,” he said.

UP Deputy Chief Ministers Kesav Prasad Maurya and Prajesh Pathak have also condemned it. They also said that Hindu religion and its culture cannot be allowed to be insulted.

Known for his controversial comments, BJP MP, Saint Sakshi Maharaj has also opposed the movie Aadi Purush. Sakshi Maharaj, MP from UP’s Unnao Constituency says, “Saibi Ali Khan, who plays Ravana, looks like the Mughal king Alauddin Khilji. “The Central and State Governments should intervene in this issue where Hindu culture has come under criticism in many scenes and ban the film,” he said.

Saint Satyendar Das, the chief priest of the Ram temple under construction in Ayodhya, has also condemned the movie Aadi Purush. He also mentioned that this is a strategy to insult saints and create controversy thereby making the film successful.

The Vishwa Hindu Parishad has also come out against the film. MP, UP Apart from this, protests against the movie Adi Purush have also started in other states. Senior BJP leader Ram Katham, who supports the ruling Shiv Sena faction of Eknath Shinde in Maharashtra, has expressed strong opposition.