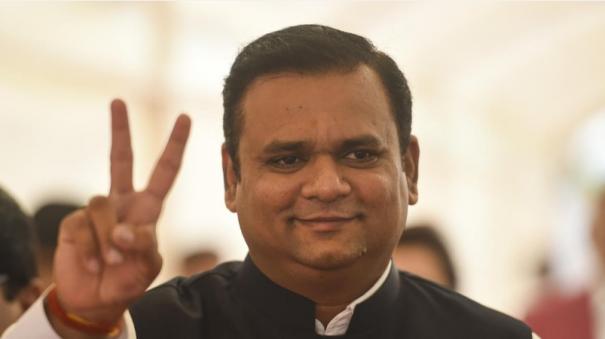 Mumbai: BJP MLA Rahul Narvekar has been elected as the Speaker of the Maharashtra Legislative Assembly. A vote of confidence is being held today in the Legislative Assembly on the government led by Chief Minister Eknath Shinde. In this regard, the ruling coalition BJP and the opposition parties held a serious consultation.

After various twists and turns in Maharashtra, the Shiv Sena, Congress and Nationalist Congress coalition government was overthrown on the 29th. Subsequently, the BJP and Shiv Sena joined forces and formed a new government in the state on the 30th. Shiv Sena dissident leader Eknath Shinde was sworn in as chief minister and senior BJP leader Devendra Fadnavis as deputy chief minister.

As the special session of the Legislative Assembly began yesterday, the election of the Speaker took place. BJP MLA Rahul Narvekar won by securing 164 votes. Rajan Salvi who stood on behalf of opposition parties got 107 votes.

Rahul Narvekar (45) is the youngest Speaker of the Maharashtra Legislative Assembly, said Deputy Chief Minister Devendra Fadnavis. His father-in-law Ramraje Naik is the Nationalist Congress Party Legislative Council President. 2 MLAs from Samajwadi Party and one MLA from All India Majlis Party did not participate in the voting.

The strength of the Maharashtra Legislative Assembly is 288. Shiv Sena MLA Ramesh passed away recently. Due to this, there are currently only 287 MLAs in the assembly.

Anil Deshmukh and Nawab Malik from the Nationalist Congress are in jail in corruption cases. Dattatre Bharani, Anna Ponsade, Nileshlangi, Babandada Shinde and Dileep Agiyore from that party did not come to the Legislative Assembly yesterday.

Speaking in the Legislative Assembly, Chief Minister Eknath Shinde said: The BJP-Shiv Sena government has taken office in Maharashtra based on the principles of Shiv Sena founder Paul Thackeray. Earlier in Indian politics it was common for members of opposition parties to join the ruling government. For the first time in Maharashtra, leaders have changed from the ruling government to the opposition party. I served as a senior minister in the previous regime. I and various ministers left the government and formed a new government.

No one is forced

I did not compel any MLA to support me. They themselves are attached to me. I don’t want chief minister post. I sit in that position by fate. I will fulfill the expectations of Prime Minister Narendra Modi who has placed his trust in me. Thus he spoke.

While speaking, Deputy Chief Minister Devendra Fadnavis assured that the “Shinde-led government will fulfill the needs of the people”.

A vote of confidence

On the second day of the special session, the vote of confidence on the government headed by Chief Minister Eknath Shinde will be held today. The ruling BJP alliance got 164 votes in the Assembly Speaker election. Political observers have said that the Shinde-led government will win easily as it needs the support of 144 MLAs to win the trust vote.

A meeting of BJP alliance MLAs was held in Mumbai last night under the leadership of Chief Minister Eknath Shinde and Deputy Chief Minister Devendra Fadnavis from BJP. It discussed voting in a confidence vote. Also, the expansion of the cabinet was discussed.

On the opposition side, Nationalist Congress President Sharad Pawar led a meeting of party MLAs in Mumbai last night. A vote of confidence was discussed in this. There are reports that separate consultation meetings were held by Shiv Sena and Congress.