No Result
View All Result
Latest News
The EU warned of the danger of a “loneliness pandemic” 26/07/2021
Rafo Raéz returns to the stage with a special show prior to National Holidays 26/07/2021
Can a mother with Govt infection breastfeed her baby? 26/07/2021
I apologize: Tamil Nadu athlete melted out of the second round of the Olympic fencing competition 26/07/2021
A hysterical celebration at the home of the Jordanian champion, Saleh Al-Sharbati, after securing an Olympic medal (video) 26/07/2021
Next
Prev
Home Politics 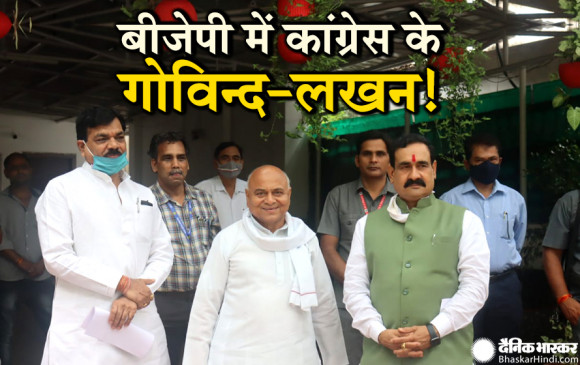 Digital Desk, Bhopal. Senior Madhya Pradesh Congress leader and former minister Dr. Govind Singh met at the residence of State Home Minister Narottam Mishra today (Wednesday). There was a closed-door discussion between the two leaders for a long time. There is talk of meeting of both in the political corridors. At the same time, former minister and Congress MLA Lakhan Ghanghoria also reached Narottam Mishra’s residence to meet him. Political experts are extracting the political meaning of this meeting of the three leaders. There are speculations that both the leaders may join BJP.

However, Home Minister Narottam Mishra tweeted and described this meeting as normal. He wrote that senior Congress leaders and former ministers Dr. Govind Singh ji and Shri Lakhan Ghanghoria ji came to the residence this morning. Met him and discussed contemporary topics.

Opposition to Govind Singh in Congress
The names of the Leader of Opposition in the Assembly are also being discussed amid speculation that former Madhya Pradesh Chief Minister Kamal Nath will get a bigger responsibility at the national level. Protests have also started in his home district after the name of former minister Govind Singh surfaced in the Leader of the Opposition race. Congress leaders have passed a resolution demanding not to make him Leader of the Opposition. At the same time, Congress district president Shriram Baghel has accused Govind Singh of weakening the party in the district. Along with this, they have also demanded his expulsion from the party. Let us tell you that at this time there is speculation about the name of Sajjan Singh Verma for the post of President of Congress and Govind Singh for Leader of Opposition.

Cabinet expansion in Rajasthan on July 28! MLAs were instructed to be present in Jaipur

Russia: Linking our military cooperation with Ethiopia to the dam crisis is “puzzling”

Bayern Munich tied with Ajax in a friendly

Punjab CM’s media advisor said, Captain will not meet Sidhu till he apologizes for the attacks done through social media

Start eating chicken there..sir, then nothing around is a problem

If we do this, we will cut the TVs .. Difficulties for the ‘Kartikadeepam’ serial .. The pit behind Nui in front!