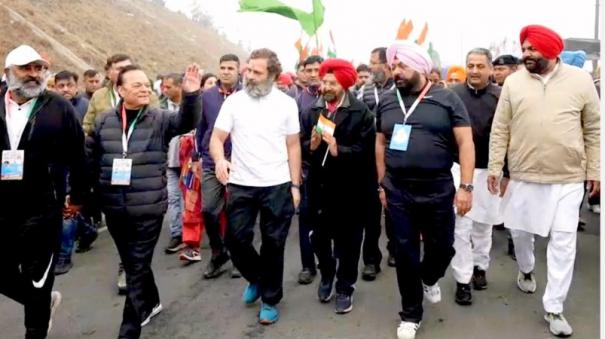 Ludhiana: After the sudden demise of Jalandhar MP Chandok Singh Chowdhury, who was participating in the Indian Unity Yatra, the Congress party has announced the cancellation of the Yatra on Saturday. Also, Rahul Gandhi’s press conference scheduled to be held in Jalandhar on Sunday has also been cancelled.

Rahul Gandhi’s India Unity Yatra, which is being held in the state of Punjab, was held in Ludhiana on Saturday. Congress Lok Sabha member from Jalandhar constituency Chandok Singh Chaudhary participated in this yatra and walked with Rahul Gandhi. Chandok Singh fainted due to a sudden chest pain during the pilgrimage. He was immediately taken to Pakwara Hospital by ambulance. He was pronounced dead there. He is 77 years old.

Following this, the Congress Party has announced that the Indian Unity Yatra will be cancelled. Punjab Congress President, Amarendra Singh Raja Waring said: “The Indian Unity Yatra is coming to an end today. The funeral of the late Congress MP is scheduled to take place on Sunday. I haven’t spoken to Rahul Gandhi yet. But we want to continue the pilgrimage after the funeral. Therefore, the Yatra is being put on hold until the funeral of the late MP is over,” he said.

Jalandhar Constituency MP Chandok Singh Chaudhary passed away today after suffering a sudden heart attack while participating in the India Unity Yatra. Our deepest condolences to Anna’s family. In view of this, there have been some changes in the Yatra. They will be informed soon,” he said.

Earlier, Congress president Mallikarjuna Kharge, in his condolence note on the death of Jalandhar MP Chandok Singh Choudhary, said, “Deeply saddened to hear the sad news of the demise of our Jalandar MP Chandok Singh Choudhary. His demise is a great loss to the Congress party. At this sad time, his family, friends, volunteers I share in the grief. May his soul rest in peace.”

In a condolence note posted on Twitter by former Chief Minister of Punjab Captain Amarinder Singh, he said, “Deeply saddened to hear the sudden demise of MP Chandok Singh Chaudhary who died today due to a heart attack. My condolences to all his family at this sad time. May Wahguru ji rest his soul in peace.”

In his condolence note, Rahul Gandhi said, “Shocked by the sudden demise of Chandok Singh Chowdhury. He was a hardworking and good man who was connected till the last level of the party. He was a strong pillar of the Congress family and devoted his life to public life from his youth till becoming an MP. My deepest condolences to his family. He said.

Due to the unexpected and shocking demise of Santokh Singh Chaudhary, Congress MP from Jalandhar, the press conference of @RahulGandhi Originally scheduled in Jalandhar tomorrow will now be held on 17th January in Hoshiarpur.