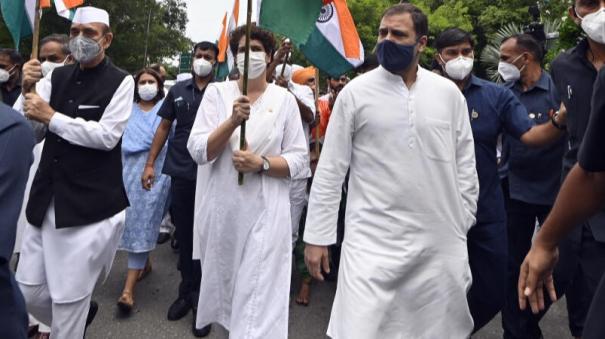 In a statement issued by Jairam Ramesh, “Congress President Sonia Gandhi is going abroad for medical examination. He visits his ailing mother before returning to Delhi. Rahul and Priyanka Gandhi are going with Sonia,” he said.

On which date will Sonia Gandhi go abroad? Jairam Ramesh has said that Rahul Gandhi is going to address the Congress meeting in Delhi on September 4, although there are no details about which places he is traveling to.

And Rahul Gandhi will start a pilgrimage from Kanyakumari to Kashmir on September 7. It is noteworthy that the Congress is preparing for this.

Congress party working committee meeting will be held in Delhi on 28th.

The Congress party suffered a heavy defeat in the 2014 and 2019 Lok Sabha elections. Rahul Gandhi, who held the post of Congress president during the 2019 elections, resigned from the post taking moral responsibility for the defeat.

Even though the Congress Working Committee urged him to stay in office, Rahul Gandhi did not accept it. Sonia Gandhi took over as interim president. In July 2020, 23 disgruntled Congress leaders wrote a letter to President Sonia Gandhi demanding internal party elections from the lower levels up to the post of Congress president.

Meanwhile, Rahul Gandhi continues to refuse to accept the post of Congress president and contest the presidential election. Senior leaders are saying that he is not interested in accepting the post. Some leaders are suggesting that Sonia Gandhi should remain in the post of president to end this confusion.

In this case, the Congress party’s high-powered National Working Committee meeting will be held in Delhi on the 28th under the leadership of Sonia Gandhi. In this meeting, a decision will be taken regarding the election schedule for choosing the new president.

In this regard, Congress General Secretary KC Venugopal said:

Congress party working committee meeting will be held on 28th at 3.30 pm. Sonia Gandhi will preside over the video meeting. In this meeting the date of election of Congress President will be decided. KC Venugopal has said this.

Dismissal of petition against national emblem on Parliament building