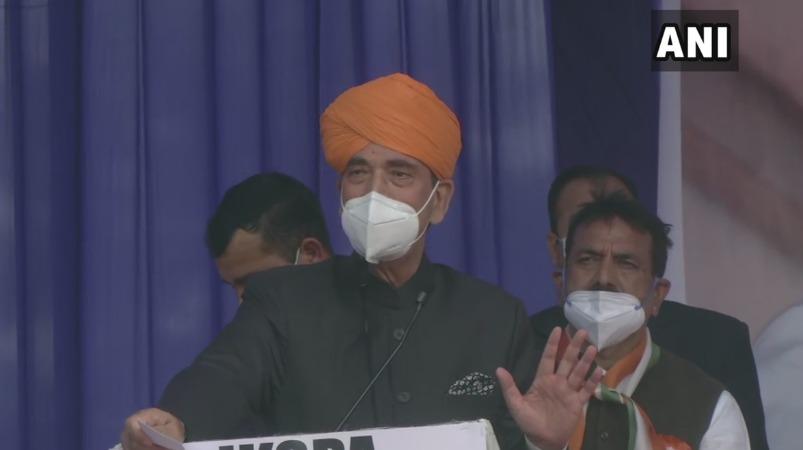 All religions, peoples and castes Congress Party Ghulam Nabi Azad, a senior leader of the Congress party, has implicitly replied to Rahul Gandhi that he respects equally.

Senior leader of the Congress Ghulam Nabi Azad He has been in his home state of Jammu and Kashmir for three days. Shanti Sammelan on behalf of Ghulam Nabi Azad’s Global Gandhi Foundation is taking place in Jammu today.

The event was attended by senior leaders of the Congress party including Anand Sharma, Kapil Sibal, Vivek Tanha, Manish Tiwari, Rajpapar and Bhupendrasingh Hooda. Most of the 23 leaders who wrote the letter said that the Congress party needed new leadership and a creative leadership.

Rahul Gandhi, a senior Congress leader and Wayanad MP, who had recently visited Kerala, met the North and South MPs. That split. He said, “I have been an MP in the North for the last 15 years. I have been accustomed to different politics. But when I came to Kerala, I was suddenly refreshed. The people here are focused on the issues, they talk about it, they are clear.

I talked to some students in the US and told them that I am happy to be in Kerala. It’s not just gravity, it’s the way you do politics, the brilliance you have in your politics. It’s a learning experience for me. “

Anand Sharma and Kapil Sibal had already objected to Rahul Gandhi’s speech and asked him to explain his speech.

in this situation Shanti Association Speaking on the occasion, senior leader Ghulam Nabi Azad also spoke in response to Rahul Gandhi. He said:

Whether it is Jammu and Kashmir or Ladakh. We respect all religions, peoples and castes. Congress Party Respects all castes, religions and people without distinction. Respects everyone equally. That is the strength of the Congress party and this practice will continue.

Many important leaders have come here. For the past 5 to 6 years, we as friends have never met and talked anywhere other than Parliament. In Parliament, we have talked about the Jammu and Kashmir issue, unemployment, deprivation of statehood, the paralysis of industry and education and the implementation of the GST tax. “

Meanwhile, one of the dissident leaders and a senior leader said, “We have come together in Jammu not only to show the strength of the party, but also to tell Rahul Gandhi our strength. From the north to the south, we will tell the people that India is one.”